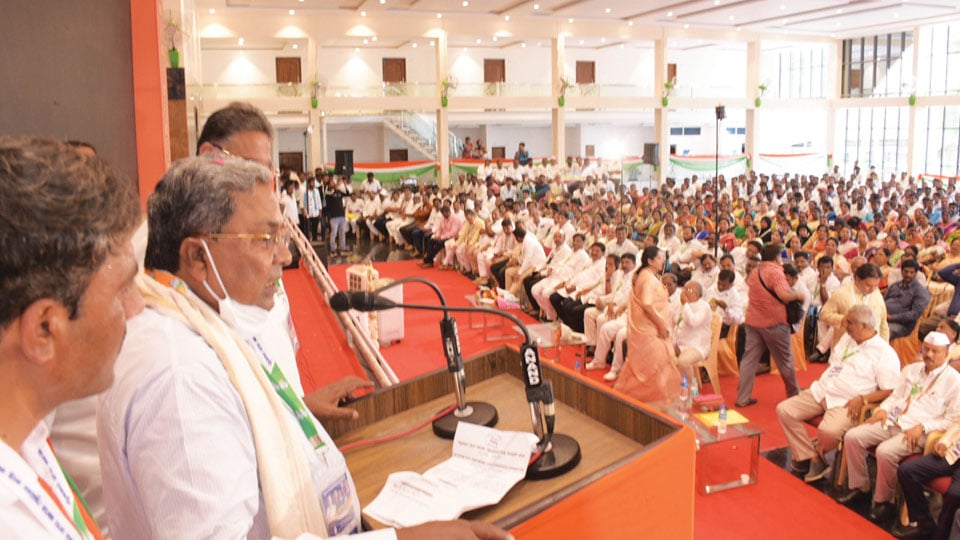 ‘Ensure victory in at least 10 seats in Mysuru district’

Mysore/Mysuru: With less than a year to go for the Assembly polls, Opposition leader and former Chief Minister Siddharamaiah has tasked party workers with ensuring victory in  at least 10 Assembly segments in his home district of Mysuru.

He was speaking after inaugurating ‘Nava Sankalpa Chintana Shibira’ organised by the City and District Unit of the Congress party at a Kalyana Mantapa near Varakodu Gate on Mysuru-T. Narasipur Road yesterday.

Stressing on the need for sensitising the voters on the achievements of the Congress Government when he was the Chief Minister, Siddharamaiah said that the party must win 10 out of the 11 Assembly seats in the district. Citing the example of the party’s victory in the just held Legislative Council polls from South Graduates Constituency where all Congress workers worked with total unity, he said that there is no doubt regarding  Congress returning to power if such an unity is shown in the forthcoming Assembly polls. Reminding that the JD(S) which held the seat was pushed to the third place, Siddharamaiah reiterated that the Congress stands a good chance of winning the forthcoming Assembly polls, for which the workers should strive hard for reaching out to all voters.

Commenting on  Prime Minister Narendra Modi’s recent visit to the city, Siddharamaiah said that the only thing that Mysureans got was some good roads, which were repaired or asphalted just ahead of the PM’s visit. Asserting that the road works would not have been taken up, but for the  visit of Modi, the Opposition leader charged the State Government of not presenting any memorandum on the State’s long pending demands or seeking more grants, to the PM.

Stating that the BJP leaders had thought of welcoming Modi with the party’s victory in the LC polls, Siddharamaiah said that did not happen as the people had taught a befitting lesson to the BJP for its misrule and corruption.

N.R. MLA Tanveer Sait in his address, said that the BJP Governments at the Centre and the State were misleading the population  through false propaganda. Maintaining that the Congress lost because the party failed in educating the masses on its welfare schemes and initiatives, he stressed on the need for taking on the communal BJP in an organised and strategic manner.

Former Minister Dr. H.C. Mahadevappa wondered what happened to Modi’s poll promise of making Mysuru like Paris. Charging Modi of inaugurating schemes formulated by the Congress, he alleged that the BJP was fomenting communal violence and hatred between caste and communities through false propaganda and vilified campaigns.

Asking the Congress workers to have a clear and thorough understanding of the Constitution, Dr. Mahadevappa contended that the country will have no future if the BJP Government is not voted out of power. He asked the Congress workers to ensure the party’s victory in the Assembly polls as it is vital in the interests and welfare of the State. Accusing the BJP of working against the Constitution, he maintained that people’s welfare, peace and harmony was fundamental to the Congress party which had fought for the country’s independence.