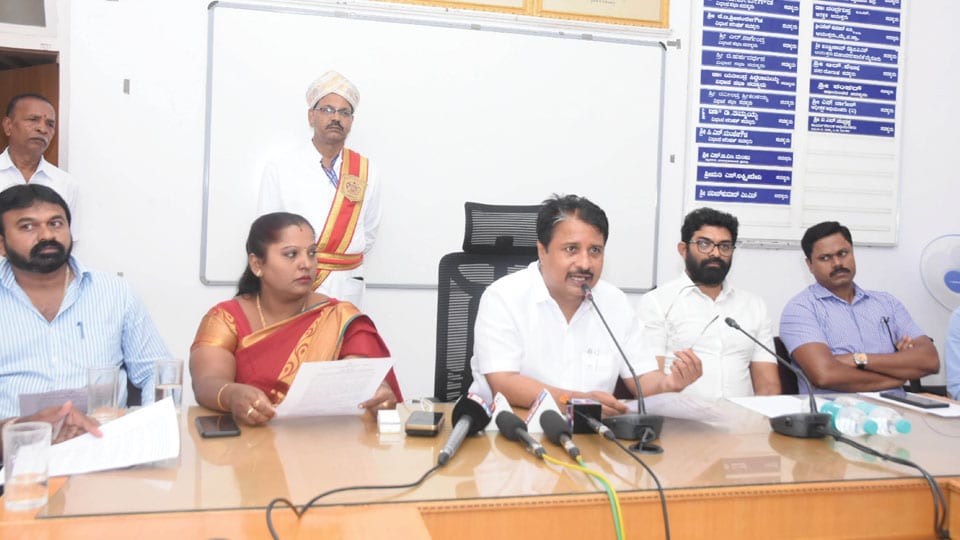 Mysore/Mysuru: The Mysuru Urban Development Authority (MUDA) has decided to provide a comprehensive electricity supply to R.T. Nagar. Though R.T. Nagar is touted among the well-planned layouts, till now, the MUDA was unable to provide power connections to the layout and this was hindering its development.

Addressing a press conference at his Office yesterday, MUDA Chairman H.V. Rajeev, accompanied by Commissioner G.T. Dinesh Kumar and MUDA members, said that the MUDA General Body meeting held on June 22 decided to release Rs. 23 crore grant to set up a 66/11 KV power sub-station in R.T. Nagar that will draw power from the main station and supply the same to individual homes.

“At present, people who have purchased MUDA sites in R.T. Nagar had to obtain temporary power connections from Chamundeshwari Electricity Corporation (CESC) and for this, they had to pay a hefty amount. This, in fact, has discouraged many property owners to build houses here. Once the 66/11 KV power sub-station comes up, the procurement of electricity will be easy,” Rajeev said.

Other decisions taken at the MUDA meeting include issuing Completion Report (CR) within seven days if the house is constructed as per the  approved plan.

Those who violated the approved plan will be given an occupancy certificate after declaring the building fit to be occupied. The meeting also decided to facilitate property owners to obtain bank loans to construct houses by issuing a No Objection Certificate (NOC).

On the inability of MUDA to create new layouts, Rajeev said that soaring land prices and the huge gap between the demand for sites and the actual availability of land have put MUDA in a tight spot.

After its plans for forming Ballahalli Layout proved futile due to land acquisition issues, MUDA initiated the process of forming the Bommenahalli Layout in land coming under Bommenahalli, Seegalli and Kamaravalli villages of Yelwal Hobli in Mysuru taluk. This too has achieved little progress.

MUDA follows a 40:60 ratio while taking over the land where its share was 60 percent and the land owner’s share was 40 percent. Now it follows a 50:50 ratio to avoid litigations and claims for more compensation. If the ratio is higher than 50 percent, it will not be profitable to MUDA. Notably, one of the main stumbling blocks for MUDA in land acquisition is that the land owners are asking for more share in the layouts.

“We are eager to develop new layouts and provide sites to people as demand is high. But the land prices have shot up and it is not easy to acquire large tracts of land with limited budget. Steep land cost is proving a major hurdle in undertaking new projects,” Rajeev added.