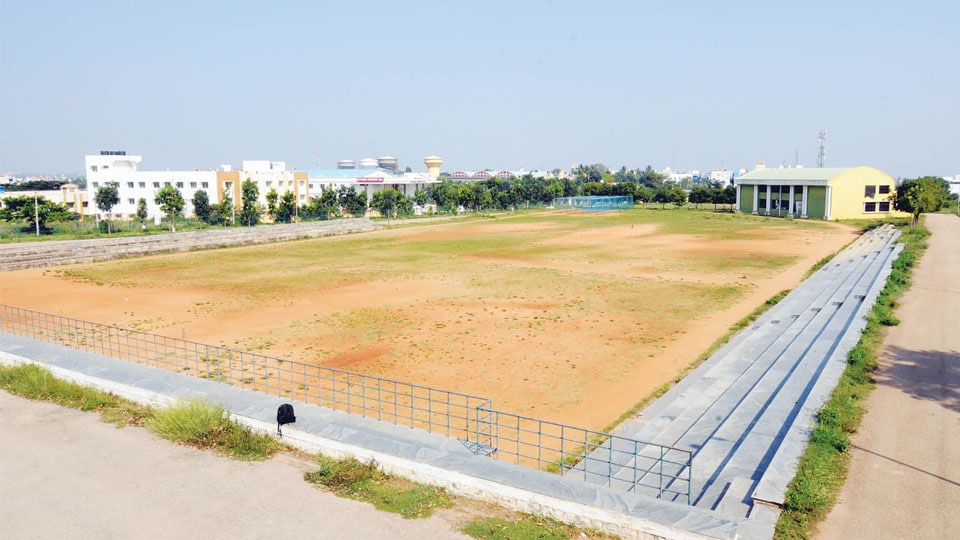 Mysuru: Sports stadiums and complexes are monuments to showcase human achievement and competition. They are also the crowning glory of many cities as these are places where many sporting careers are made. But due to lack of interest, or a sudden shift in priorities, many stadiums have been left to decay like this Sports Complex at Vijayanagar that has been built by Mysuru Urban Development Authority (MUDA).

Located on the Kannada Sahitya Parishat Road in Vijayanagar First Stage, the Sports Complex was built in a vast area of 11.20 acres from the Kannada Sahitya Bhavan till the Vidyavardhaka College of Engineering. The ambitious project that was meant to provide a vast space to sports talent was built at a cost of Rs. 3 crore in 2010 but has not been put to use even for a single sports event so far.

The Sports Complex has two lawn tennis courts, two basketball courts, one gymnasium and a vast playground. While one giant structure is left to die as there are no activities here, the other part of the structure is being used for illegal activities like gambling and prostitution. Anti-social elements come to the place after dark and indulge in nefarious activities, despite the presence of security guards.

The Sports Complex that was the pride of Vijayanagar and surrounding areas in 2010, has now been reduced to a haunted house with broken windows, leaky ceiling and creaky doors. Along with the Sports Complex, MUDA officials mooted the construction of an open air theatre to provide a stage for residents to conduct cultural activities. However, this plan was shelved later.

While constructing the Sports Complex, MUDA had provided space for basic facilities like a walking path, stone benches, streetlights, underground drainage, toilet and water facilities and a compound wall. A separate building has been constructed for gymnasium but MUDA did not install gym equipment inside.

Even after eight years of construction, MUDA has not handed over the Sports Complex to anyone to maintain and manage. MUDA that was enthusiastic when the project was sanctioned and implemented showed absolute lack of interest to take the project to a logical end and has left the project to rot. 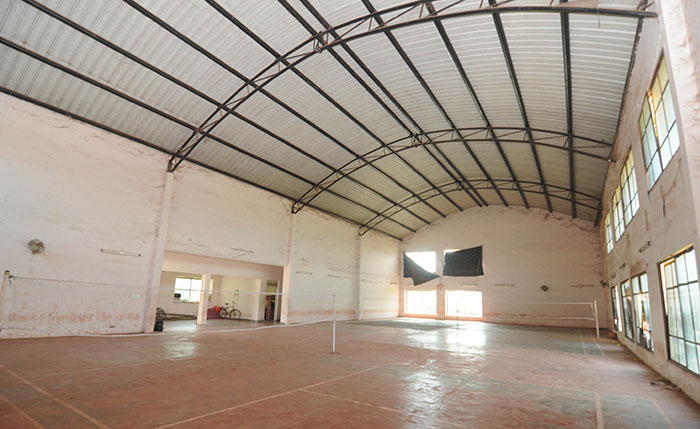 Interestingly, MUDA spends over Rs. 30,000 per month to maintain the neglected Sports Complex and pays electricity charges of Rs. 6,000 and pays security guards who keep a watch over the Complex in three shifts. It also pays money to maintain streetlights.

Area residents said that even if MUDA had given the Sports Complex on rent immediately after construction, it would have generated some revenue. Though a rent (ranging between Rs. 1,000 to Rs. 3,000) has been fixed for schools and colleges and clubs to conduct their sports activities, there is no response for the scheme.

SPORTS COMPLEX TO BE GIVEN ON LEASE

Speaking to Star of Mysore this morning, MUDA Superintending Engineer Suresh Babu said that MUDA will give the Sports Complex on lease for five years. “We had written letters to District Sports Authority regarding conduct of sports events here but we have got no response from them. We have now decided to call for tenders to manage and maintain the Sports Complex,” he said.

The Complex will be divided into three wings – Tennis Court, Basketball Court and Gymnasium – and three tenders have already been called from interested parties who want to conduct sports activities, he said.  “Tenders have been called yesterday for as-is where-is condition of the Sports Complex and people who are interested in maintaining the Complex must foot the water and electricity charges,” he said.

Once the tender is obtained, private parties can conduct sports activities and charge the participants to recover the costs and gain profit, Suresh Babu added.

Mysuru: Reacting on the pathetic state of MUDA Sports Complex at Vijayanagar, Chamaraja MLA L. Nagendra, who was the MUDA Chairman earlier, told Star of  Mysore that the project was implemented without foresight. “There are many projects by MUDA that have turned waste including the agriculture markets built at over six places in city. These abandoned projects show lack of initiatives by MUDA and their lack of vision,” he said. The MLA said that he will immediately write to MUDA Commissioner regarding the issue and ask MUDA to approach the Sports Authority and make the best use of the Sports Complex. “I will also raise the issue in the next MUDA Board meeting,”  he said.