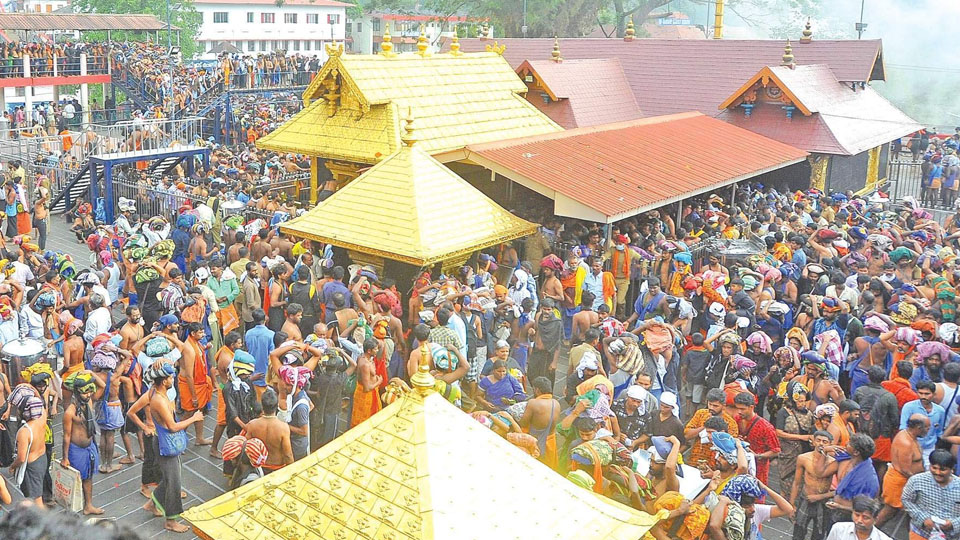 Entry of women to Sabarimala Temple: SC says denial of entry is against Constitutional mandate

New Delhi:  Observing that the right of a woman to pray was equal to that of a man, the Supreme Court yesterday heard the controversial ban of entry to woman aged between 10 years and 50 years at the Sabarimala Temple in Kerala.

“Your right to pray being a woman is equal to that of a man and it is not dependent on a law to enable you to do that,” observed Justice D.Y. Chandrachud. Chief Justice Dipak Misra, while hearing the matter observed, “On what basis you (temple authorities) deny the entry. It is against the Constitutional mandate. Once you open it for public, anybody can go.” The temple has refused to allow women of menstruating age to enter the temple.

The hearing began on Tuesday and the Apex Court asked the counsel for petitioners and others to limit their arguments on the questions of reference made by a three-Judge Bench of the Supreme Court last year. The top court had last year asked a Constitutional Bench to examine the legality of the ban on entry of women in the age group of 10-50 at the temple.

The Bench, also comprising Justices R.F. Nariman, A.M. Khanwilkar, and Indu Malhotra, fixed a time limit for the petitioners. The CJI said there is no concept of “private mandirs (temples).” Once a temple is opened, everybody can go and offer prayers. Nobody can be excluded.

The Chief Justice noted that the Sabarimala Temple drew funds from the Consolidated Fund, had people coming from all over the world and thus, qualified to be called a “public place of worship.” A batch of petitions has challenged the prohibition on women of a certain age group from entering the Sabarimala Temple.

READ ALSO  No Ayyappa darshan at Sabarimala from June 14

“In a public place of worship, a woman can enter, where a man can go. What applies to a man, applies to a woman,” Chief Justice Misra observed.

The Kerala Government was quick to point out to the Bench that the State supported entry of women into the Sabarimala Temple. In 2016, the State had opposed it in the Supreme Court. Senior advocate Indira Jaising, for the petitioners, argued that “religion is a relationship between you and your creator.”

Justice Chandrachud said women and their physiological phenomena are creations of God — If not God, of nature. “A woman is a creation of God, if you don’t believe in God, then of nature. Why should this (menstruation) be a reason for exclusion for employment or worship or anything,” he said. Justice Nariman said the age notification is was “arbitrary” as it “leaves out the 9-year-old girl and 53-year-old woman who are menstruating.”

The Travancore Devaswom Board, which manages the historic temple, had earlier in January made it mandatory for women to carry documents to verify their age in a bid to restrict entry of women aged between 10 years and 50 years.