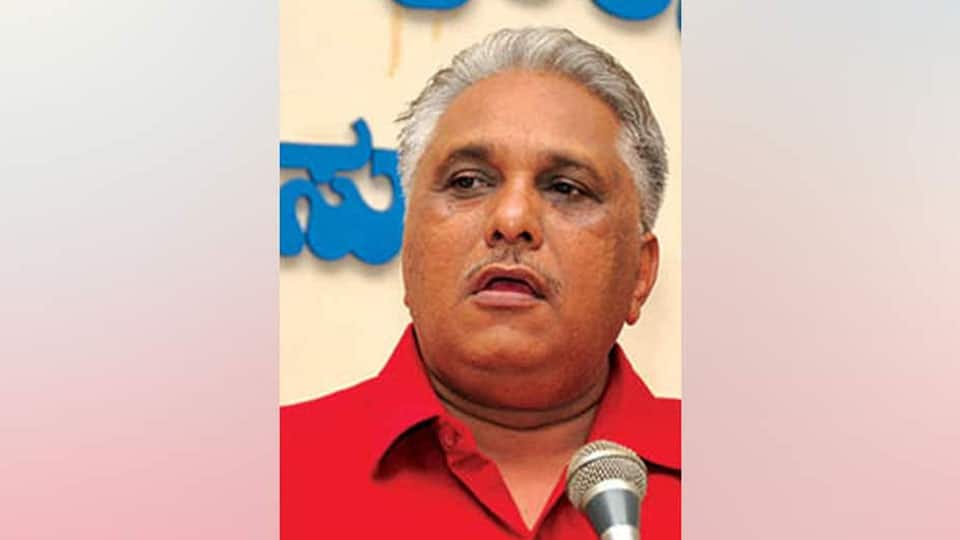 Mysuru: Accusing the Congress of raking up fake diary issue in a bid to discredit State BJP Chief B.S. Yeddyurappa in the run up to the Lok Sabha polls, BJP spokesperson and former MLC G. Madhusudan said that the statement by the Income Tax Department (I-T) on the diary case, is a slap on the face of the Congress.

Addressing a hurriedly called press meet at the BJP office here last night, Madhusudan lashed out at AICC leader Surjewala for releasing the ‘fake diary’ at a press meet in Delhi, which the Congress claims is signed by Yeddyurappa after making payments to top BJP leaders and the party to the tune of Rs. 1,800 crores. But the I-T Department officials have said that the diary was a fake one and there was no such diary with the I-T Department for investigation.

‘The I-T Department’s announcement that the diary is a fake one, is a slap on the Congress which has been making baseless allegations against the BJP in the run up to the LS polls,’ he said.

Pointing out that Priyanka Gandhi’s husband Robert Vadra has been visiting the Enforcement-Directorate every other day for questioning in connection with money laundering charges, Madhusudan alleged that the Congress had raked up the diary issue only to cover up its huge corruption and scandals.

Hitting out at the Congress for calling PM Modi Chor Chowkidar, the former MLC said that the people very well know that Rahul Gandhi, Randeep Singh Surjewala, D.K. Shivakumar and several other Congress leaders were the real Chors.

READ ALSO  CM to contest from only one seat

Maintaining that the Congress was a sinking ship, Madhusudan demanded an apology from Congress leaders for making baseless charges against BJP leaders.

Giving a new analogy for AICC, Madhusudan said that AICC was infact ‘All India Criminals Committee’ and took a dig at AICC President Rahul Gandhi for fancying his chances of contesting from Wayanad in Kerala, along with Amethi, which he (Rahul) now fears about losing’.