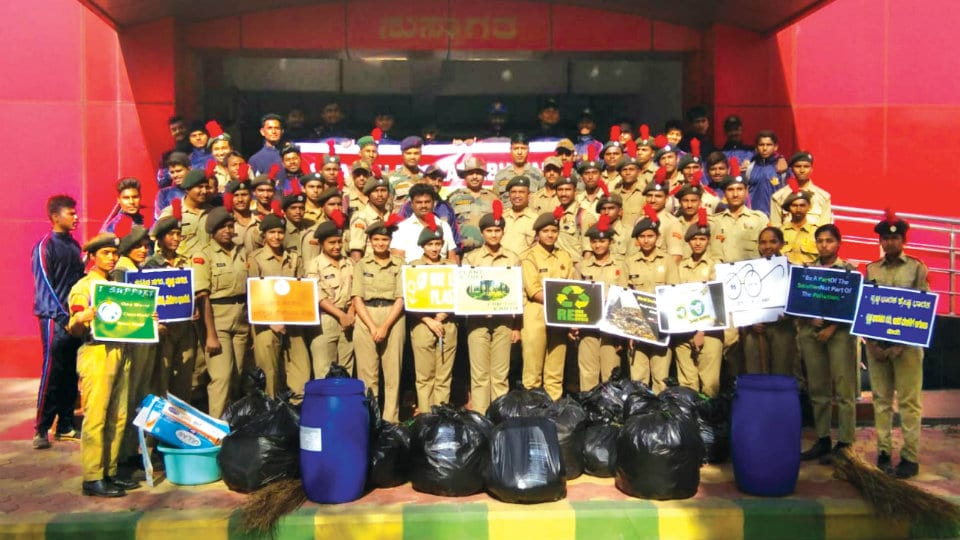 Mysuru: Keeping the surroundings and environment clean and hygienic is the responsibility of every citizen, both individually as also collectively. This was the message that the Cadets of 1 Karnataka Engineer Company NCC Mysore wanted to convey by means of a cleanliness drive that they carried out in R.S. Naidu Nagar recently.

Actions speak louder than words and the 70 Cadets of 1 Karnataka  Engineer Company NCC, demonstrated this by rolling up their sleeves and cleaning up the area, starting from the Outer Ring Road junction to KSRTC bus stand and further on to the Kesare Primary Health Centre till the Government High School.

The public of this area was pleasantly surprised when the Cadets, along with the Instructor Staff of NCC, under Lieutenant Colonel C. Chandrasekhar, Commanding Officer, 1 Karnataka Engineer Company NCC, moved in a disciplined manner, carrying placards, encouraging and motivating the public to protect their environment, reduce the use of plastics, segregate the waste generated from homes and control pollution.

A few school children of the Government High School, who got motivated by the actions of the NCC Cadets, joined them in the cleanliness campaign.

National Cadet Corps (NCC) is the largest youth organisation in the world and inculcates a sense of discipline, national unity, integrity and social responsibility amongst the Cadets who are students drawn from various Schools and Colleges.

Swachh Bharat is a countrywide campaign, especially the year 2019 being the 150th Birth Anniversary of the Father of Our Nation Mahatma Gandhi.

This kind of activity will go a long way in moulding these Cadets into socially responsible citizens, who care and love their environment and nature.