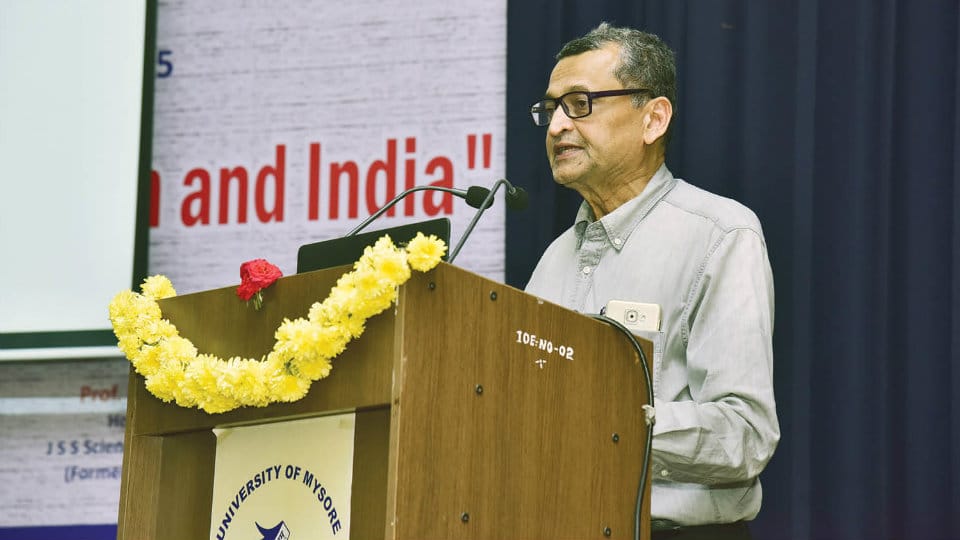 Prof. Srihari started his lecture by citing some of the historical developments that led to the emergence of Artificial Intelligence or Machine Learning technologies.

Highlighting the three important milestone that transformed the world, he spoke about the developments of steam engines and electrical power systems and also the developments in the field of Computer Science.

The speaker said that industrial revolution took centuries but AI revolution was very fast and replaced both physical and intellectual labour. He explained how AI has been used in games, planning, natural language information retrieval systems and in sensors — for example use of AI in driver-less cars and predicting weather temperature.

He emphasised that because of AI and its development, new kinds of workforce would emerge in the market; hence there is an urgent need to introduce AI in schools and colleges in India to prepare future generations to face the challenges.

Prof. G. Hemantha Kumar, Vice-Chancellor (VC), UoM, lauded the MyDLIS for organising Informatics Endowment Lecture Series continuously for the last 15 years on emerging cutting-edge technologies on digital libraries. The VC said that the distinguished speaker of the day, Prof. Srihari, was one of the external examiners of his doctoral thesis on pattern recognition.

On the occasion, the VC extended an invitation to Prof. Srihari to be Residential Professor of University of Mysore to share his expertise in Artificial Intelligence and Machine Learning to the teaching and student community in the University.

N.V. Sathyanarayana, Chairman & Managing Director (CMD) of Informatics India Ltd., Bengaluru and an alumnus of MyDLIS, the man behind this Informatics Lecture Series on Digital Libraries, was also present.

He said he will extended his full support to make the Informatics Endowment Lecture Series on Digital Libraries a big annual event of the University with Computer Science Department which has close disciplinary tie with Library and Information Science field.

The faculty and student community from MyDLIS and other Departments of Mysore University attended the event in large numbers. Prof. Khaiser Jahan Begum, Professor & Chairperson of MyDLIS, welcomed and introduced the speaker. Prof. N.S. Harinarayana compered. Prof. M. Chandrashekara proposed a vote of thanks.