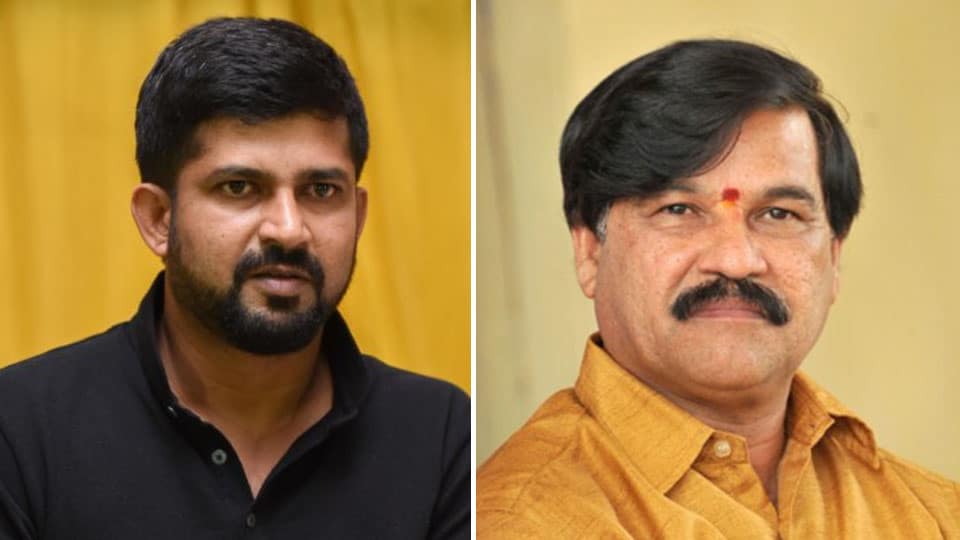 Mysore/Mysuru: The issue of stench emanating from the Solid Waste Management Unit (Excel Plant) at Sewage Farm premises in Vidyaranyapuram and Mysuru-Kodagu MP Pratap Simha’s statement that he was committed to solve the problem while Krishnaraja MLA S.A. Ramdas insisting that a public opinion has to be sought before implementing any new project has led both the MP and the MLA to clarify their respective stands before the media.

The issue that began at a meeting chaired by Urban Development Minister B.A. Basavaraj (Byrathi Basavaraj) and Mysuru District Minister S.T. Somashekar at Mysuru City Corporation (MCC) on May 7 where Simha and Ramdas reportedly exchanged words on the Excel Plant issue continued yesterday with Ramdas issuing a clarification. Today again, MP Pratap Simha followed it up with another rejoinder that was released to the media with photographic evidence saying that a transparent and honest effort was made to solve the problem.

In his clarification, Ramdas, who was a former Minister too, has stated that he has no objection to scientific waste disposal as it has been done in Nagpur and other places by Zigma Global Environ Solutions, a private solid waste management services company that carried out bio-mining of 8 lakh tonnes of legacy waste spread across 50 acres in Nagpur.

“I have no objection to the Nagpur Model as proposed by Pratap Simha and I don’t have any personal difference of opinion with Simha and as he has been repeatedly saying, I am like his brother and I have taken his views that no Minister or MLA has done anything so far to solve the stench problem at Vidyaranyapuram in a positive way. I represent the Krishnaraja Constituency under which comes the Excel Plant and people have reposed their faith in me and in the interest of people, I am urging the MP and the Ministers to shift the Excel Plant to a different location,” he stated.

He said that if the Nagpur model is carried out in Mysuru without again inconveniencing the people of his Constituency, he was ready to co-operate with the officials and elected representatives to implement the project.

“I have no objection if the efforts are made to convince people about the new project. The people should be convinced that the proposed project will not create environmental hazards and also will not endanger their health. I suggest that the waste treatment plant be shifted from Vidyaranyapuram in the heart of the city to Rayanakere that is 8 kilometres away from the heart of the city. The Mysuru City Corporation has already acquired 110 acres of land at Rayanakere,” the MLA stated.

In his statement released to the media with photographic evidence and clippings of several newspapers, Pratap Simha today stated that as pointed out by MLA Ramdas, a public opinion has already been taken to clear mountains of legacy waste accumulated at Excel Plant.

Citing a series of reports published in media and photographs of him and previous District Minister V. Somanna interacting with officials and people residing in the surroundings of Vidyaranyapuram plant, the MP stated that the series of meetings were a part of generating public opinion on the project.

The untreated waste of two lakh tonnes accumulated at the plant remains the bone of contention for long and the foul smell that emanates from the plant has been taking a toll on the health of more than 50,000 people residing in the vicinity and surroundings including Vidyaranyapuram, Kanakagiri, J.P. Nagar, Gundu Rao Nagar and Vishweshwaranagar, he stated.

That’s when the suggestion came up to rope in the services of Zigma Company which has been deploying bio-remediation technology to clear the waste in Nagpur and several other cities which has seen tremendous success. “The project is set to take off after keeping the proposal before the Urban Development Department. In a short span of five months, honest efforts have been made to find out a solution. Is it wrong?” he questioned.

“On Nov. 5, 2019, Somanna had led a delegation to the Excel Plant. Following the inspection and opinion of the people gathered at the plant, Somanna had formed a committee under the Chairmanship of Deputy Commissioner Abhiram G. Sankar besides directing the committee to submit a report before Nov. 25. It was later instructed that the officials must visit the plant in Nagpur in Maharashtra and submit a report,” Simha stated, citing the newspaper clipping and photos.

“A team of Corporators and officials led by the then Mayor Pushpalatha Jagannath including the DC and MCC Commissioner Gurudatta Hegde visited the Nagpur plant and filed a positive opinion during the Karnataka Development Programme (KDP) progress review meeting held on Jan. 3. MLAs G.T. Devegowda and L. Nagendra had also favoured the project. MLA Ramdas too had been invited to all the above meetings,” Simha stated and added that there was an opportunity for everyone to air their views in the meeting.

The team that visited Nagpur submitted a report and the Nagpur model project has now reached the stage where the works on installing the plant is set to take off. “All this has been achieved after running from pillar to post for three months. What more can we do? Was it wrong to take the issue to its logical end?” Simha questioned and added that like all elected representatives, MLA Ramdas too could have attended the meetings and addressed the three-decade-long issue.

“A plan is ready to dump and efficiently process waste at Rayanakere, Vidyaranyapuram and Kesare. This has been done to put a full stop to the often-heard argument over dumping all the waste at Sewage Farm. Also, not only Zigma, any company in the world can take up the tender,” the MP stated.