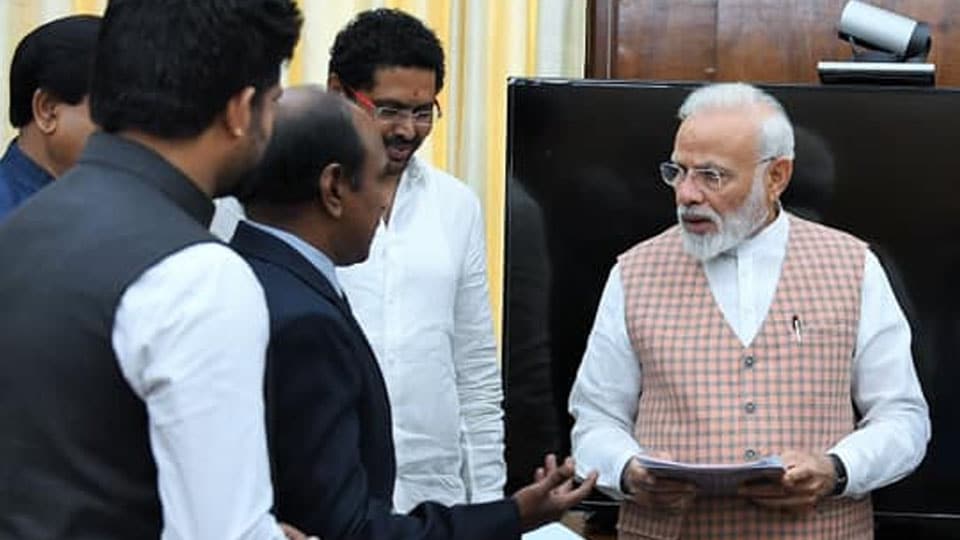 Mysuru: “Never dream of becoming something, if you dream, dream of doing something.” These words from Prime Minister Narendra Modi have been the foundation for India’s ambitious start-up campaign — Start-Up India, Stand-Up India.

Modi has won over entrepreneurs with this initiative and steps that made starting up in the country easier. He took a slew of policy and Budget initiatives to build a strong, conducive, growth-oriented environment for Indian start-ups and thereby help generate lakhs of job opportunities. Now in his second term at Office, India’s start-up ecosystem has boomed and most of that growth has been in metros and big cities.

But far from the metros, a new breed of start-ups is solving ‘real India’ problems. These businesses are bringing innovation to every sector and creating solutions to the problems the country faces. Take HGSOLTEC Pvt .Ltd., a Mysuru-based innovative Solar Start-Up as an example. It has been recognised as one among the top 400 promising start-ups in India.

K. Gururaj and M.L. Harsha of HGSOLTEC had an opportunity to interact with PM Modi and the meet was facilitated by Mysuru-Kodagu MP Pratap Simha. The company’s two product design has won the India Design Mark Award.

It is a solar start-up with four patented innovations incorporated in their two product designs. It is the first DIPP (Department of Industrial Policy and Promotion) recognised innovative solar start-up in Mysuru. It works on conservation of water and electricity in day-to-day life of common man. With out-of-the-box thinking, the company invented new-generation electric and solar geysers that can save power and water.

Explaining their product to Modi, Harsha and Gururaj told him that geysers at present use 130-year-old principle wherein 50 percent of energy is wasted to reheat water. With the invention of new concept, this has been eliminated and the ‘Smart Electric Geyser’ developed by HGSOLTEC saves 50 percent electricity and has many user-friendly features. Each geyser can save 365 units of electricity per year and can slash 30 percent of electricity bills in each home.

The company has invented solar geysers which give instant hot water thereby eliminating the wastage of cold water which happens in present day solar water heaters. Through this new technology, each user can save approximately 4,000 litres of water every year.

Modi gave a patient ear to the solar and water saving idea and appreciated the initiative that is coming from Mysuru, a Tier-II city.  “Since PM always insisted on water conservation, these new products occupy much relevance in future. We have submitted our production and financial plans and requested the PM to speed up financial approvals under Start-Up India,” Harsha told Star of Mysore.

“We invented and worked on these product concepts since the last 7 years. The first patent was granted in 2013 and subsequent patents on 3 different concepts in 2017. The concept is to make solar energy usage for water heating, affordable and sustainable and to build a multi- utility product,” he explained.

Harsha said they will set up a world-class geyser manufacturing plant in Mysuru and expect to export it to 120 countries. “We are expecting soft loans from the Department of Science and Technology to construct our factory and we hope to start production after securing mandatory approvals in another 8 months,” he said.