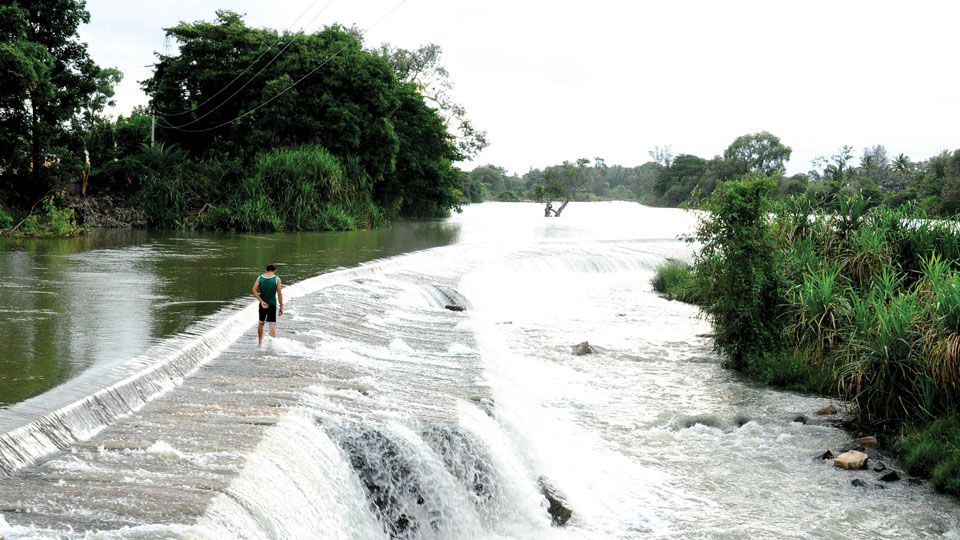 From Rishi Kanva Ashrama to a hub for drunken youth: Balamuri’s Bane

Srirangapatna: Every year during monsoon, certain places in and around Mysuru attain extra glory due to gushing of rainwater and also due to water release from reservoirs. They attract tourists in hordes. Among the places that are crowd-puller are Balamuri and Edamuri near Srirangapatna.

Balamuri is a popular picnic spot where tourists and local people go to spend time with their family and friends. It is a scenic and artificial waterfall created because of the construction of a concrete barrier across the flowing Cauvery. When water is released from the Krishna Raja Sagar (KRS) Dam, it forms a beautiful sight.

When water is released, it comes at a great force at Balamuri and tourists who are on the barrier are dragged downstream that is full of sharp rocks and boulders. If the beauty of waterfalls is at one side, on the other side is the deadly nature of the Balamuri Falls. Compounding the problem is the lack of basic facilities and cleanliness.

More than 12 persons have drowned at Balamuri and Edamuri between January and June this year. In the past 14 years (2006 to 2019 till June), a total of 106 persons have lost their lives.

Legend says that Rishi Kanva used to meditate on the banks of River Cauvery and he used to walk on the banks and reach Balamuri to pray under a Jamun tree that had a raised platform around it. Local villagers said that annually, the Jamun tree bore only one fruit and that fruit was only visible to Kanva Rishi.

As ages passed, a temple was built at the sacred place and it became a pilgrimage centre. Balamuri and Sri Venugopalaswamy Temple at Hale Kannambadi village were must visits to the pilgrims. After Sri Venugopalaswamy Temple submerged under the waters of KRS (now the Khoday Foundation has translocated and rebuilt the temple at Hosa Kannambadi village), Balamuri gained importance. After water started being released from the KRS, the spot began attracting tourists in large numbers.

A place for drinking and merry-making

But unfortunately, such a place of historical significance has now become a place for anti-social elements and youths, in a drunken state, spoil the sanctity of the place. On the outer boundaries of Balamuri, there are many shacks that sell toddy or liquor accompanied with spicy dishes made from fried freshwater fish and crabs.

The entire Balamuri premises and surroundings have a lot of Eachalu Mara (palm tree or toddy trees) and locals make money by tapping toddy and selling  it by the road sides. Many shacks selling toddy dot the roads leading to Balamuri from Mysuru and Bengaluru. Youths, especially from colleges in Mysuru and Mandya, come here to drink and have fun.

Walking on the horse-shoe-shaped barrier

Some youths, in an inebriated state, to impress their friends or for a selfie, walk dangerously over the horse-shoe-shaped barrier. Usually due to continuous release of water, the barrier is slippery. One wrong step, adventurers are dragged downstream that is full of sharp rocks and boulders. The increased death rate at Balamuri is a testimony to the danger associated with walking along the barrier.

Despite the Balamuri Grama Panchayat and the KRS Police collaborating to install gates and warning boards at the entrance of Balamuri Falls, youths climb the gate and enter the waters. They ignore the warnings and end up losing their lives.

Sadly, when the statistics of the people losing their lives is examined, all of them are aged between 18 and 35 years of age. Certain youths enter the place where water gushes out from the KRS Dam at Balamuri and dangerously try to cross the gates. In the process, some youths lose balance and slip into the water.

Villagers say that alcohol must be completely banned in the Balamuri surroundings and there must be at least dawn-to-dusk Police security at the gates to prevent the entry of tourists. Cases must be booked against violators and only this will act as a deterrent.

A favourite place for Dr. Rajkumar

Thespian Dr. Rajkumar’s favourite place for film-shooting was Balamuri. When he was at the height of acting in Kannada cinemas, often, villagers used to see film crew vehicles parked on the road sides near Balamuri.

The scenic place has been vividly captured in many Rajkumar movies including Hosabelaku and Devatha Manushya.

Local villagers say that Dr. Rajkumar had financially helped to develop Balamuri. Not only this, he also had urged his fellow stars to shoot at Balamuri so that it can contribute for the overall development of the site that has a lot of historical value.