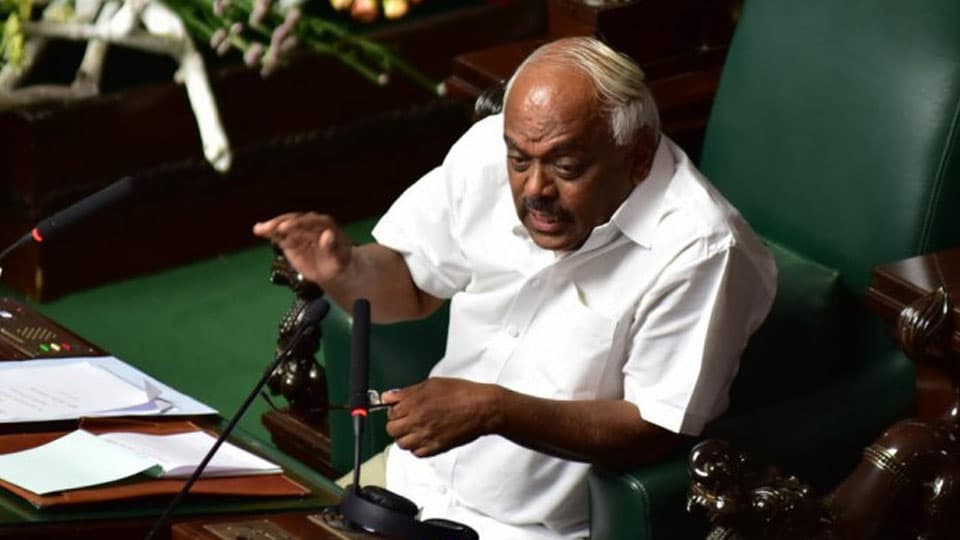 Ramesh Kumar summons rebels to his Office at 11 am tomorrow

Bengaluru/ New Delhi: Karnataka Speaker K.R. Ramesh Kumar has summoned rebel law-makers at 11 am tomorrow at his Office after a request by the ruling Congress-Janata Dal (Secular) Coalition to disqualify them, amid a row over Trust Vote. This move indicates that a Trust Vote may not take place today. No Trust Vote was held last week despite two deadlines on Friday set by Governor Vajubhai            Rudabhai Vala.

In a new twist to the political saga, the grand old party (Congress) asserted that the JD(S) was “ready to sacrifice” for the Coalition and they wanted either Siddharamaiah or Dr. G. Parameshwara or D.K. Shivakumar to be the Chief Minister.

Initial reports this morning said that the fate of the fragile Congress-JD(S) Government was likely to be decided on the floor of the Assembly this evening itself as the Speaker has set a deadline of 6 pm today for the Floor Test.

Speaker told news channels in front of his house this morning that the Trust Vote will take place before 6 pm today.

“Rebels will be marked absent if they don’t show up,” Ramesh Kumar had said. But the Speaker did not mention the 6 pm deadline inside the Assembly.

“In your speeches today, make sure that dignity of Assembly is kept alive. These are time-stalling tactics being used. It harms the image of Assembly,” the Speaker told the MLAs.

This development came after the rebel MLAs yesterday bluntly refused to compromise on their stand and CM H.D. Kumaraswamy (HDK) made an appeal to them to attend the House in an effort to save his 14-month-old Government.

HDK reportedly wants the Trust Vote on Wednesday as the Supreme Court may hear pleas on it tomorrow. The Speaker has reportedly refused to heed the CM’s request. Meeting a JD(S)-Congress delegation this morning, the Speaker said that he cannot delay Floor Test at any cost as he had made a promise in the Assembly on Friday itself.

“You can discuss till 6 pm. I am ready for it but I have to put the confidence motion for voting today itself,” the Speaker said making it clear that the Trust Vote will take place before 6 pm.

“I am confident that the discussion on confidence motion will end today and House will agree for voting. I can’t independently decide on this but I am sure the Government will keep up its promise to complete the exercise today,” Speaker Ramesh Kumar said.

On summoning the rebels, Ramesh Kumar told Congress Legislature Party leader Siddharamaiah, “Issuing whip is your right. Following them is left to the MLAs. If any complaint comes to me, I will follow rules and take a decision.”

Siddharamaiah had raised a ‘point of order’ on the issue of whip in the light of the Supreme Court order last week.

In his ruling, the Speaker said Siddharamaiah was free to exercise his power of initiating action against MLAs, who defy whip under the 10th Schedule of the Constitution.

Meanwhile, the Supreme Court this morning refused to hear the pleas of two Independent MLAs, who withdrew support to the Government. They were seeking Court direction to ask the JD(S)-Congress Government to finish the Floor Test by today evening itself. The Court has, however, refused to hear the matter on an urgent basis and also said that they would not interfere in the matter of the pending Floor Test.

A Bench headed by Chief  Justice Ranjan Gogoi said, “Impossible. We have never done this before. Tomorrow we may see to it.”