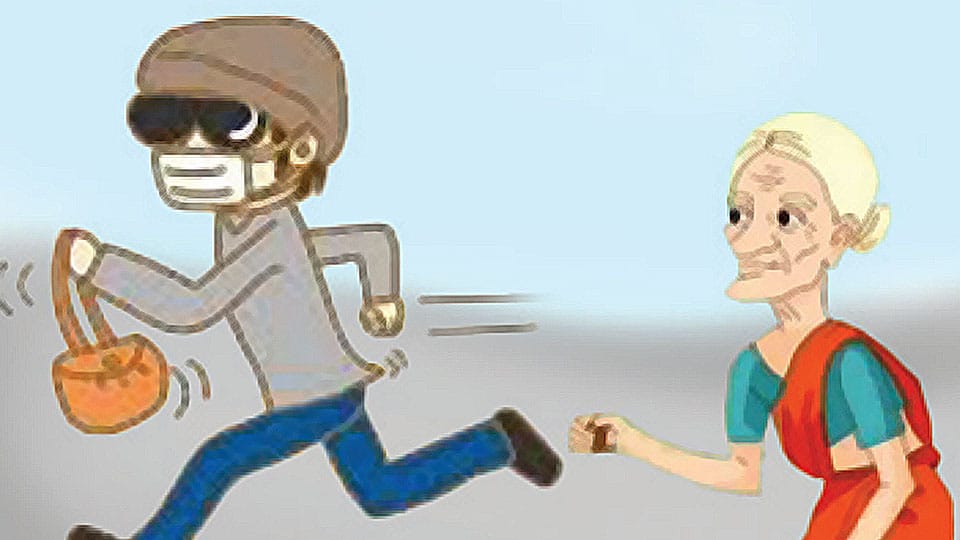 Mysuru: Despite Devaraja Police conducting orientation session recently for nearly 100 Security Guards on how  to control violent incidents, attacks by public and avert other untoward incidents that may occur at the Hospital premises, an incident of miscreant cheating an elderly lady and decamping with her jewellery and cash at K.R. Hospital on July 12, has come to light lately.

The elderly woman, who lost her valuables, is 65-year-old Puttamma, a resident of Gangarahosahalli in H.D. Kote taluk.

On July 12, Puttamma had come to K.R. Hospital to undergo diabetes test during which a 40-year-old unidentified man introduced himself to her and told her that he will get her financial aid from the Government and took her towards J.K. Grounds.

He then told Puttamma to remove the jewellery she was wearing and keep it in her purse as the officials would not sanction the financial aid if they see her wearing gold ornaments.

After Puttamma removed her 38 grams gold chain and eight grams earrings and kept them in the purse along with Rs.1,100 cash, the miscreant told her that she cannot take the purse inside as it would be checked and asked Puttamma to give him the purse and collect it later.

The miscreant, after receiving the purse from Puttamma, allegedly made her unconscious and fled from the spot.

Puttamma, who woke up after sometime, searched for the unidentified man but in vain.

She then returned to her village and narrated the incident to her family members following which a complaint was lodged at Devaraja Police Station after a few days of the incident.

Devaraja Police, who have registered a case in this regard, are investigating.

Elderly persons targeted: It looks like there is a gang of miscreants who target elderly persons that too women coming from rural areas for health check-up to K.R. Hospital.

They befriend the patient and their caretakers and then cheat them. There are women too involved in this racket.

One of the common modus operandi by the miscreant is they tell that he/she has found a purse and tell the person who is targeted that they would share the money inside the purse and then take the person where there is less movement of people. When the miscreant and the person reaches the spot, another person claiming to be the owner of the purse comes to the spot and charges the person of stealing the purse.

When the person denies of stealing the purse, the miscreants then ask her (targeted person) to remove her mangalasutra and place it in a piece of cloth and ask her to swear and in the process make away with the gold mangalasutra. In most of the cases, miscreants place fake gold jewellery in a piece of cloth, exchange the same with genuine gold ornaments and hand over the fake ones to the people they had targeted.

About four months ago, Devaraja Police had arrested a person on charges of cheating elderly women coming to K.R. Hospital and had recovered 15 gold chains from him. Despite this, miscreants have continued to cheat elderly women and the public, despite knowing such incidents, fall prey to such miscreants.