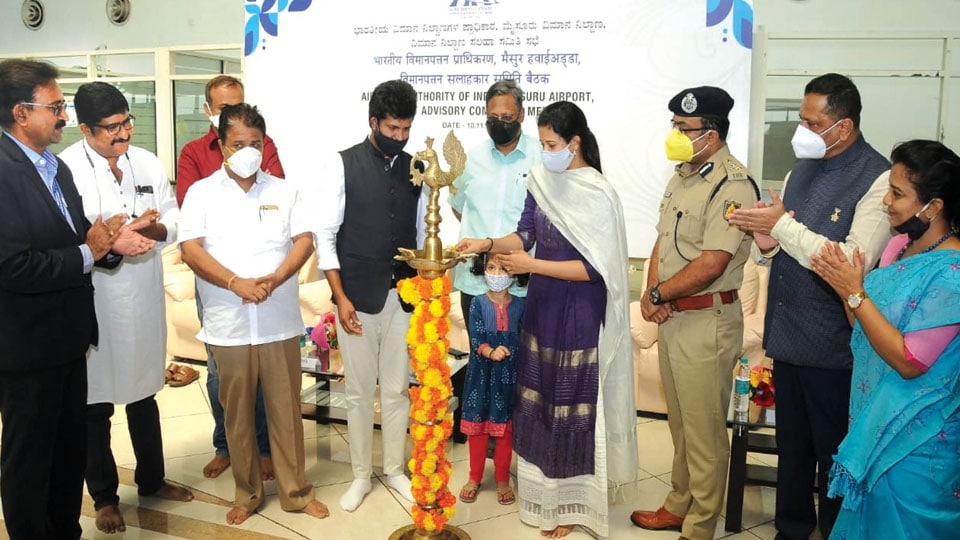 Mysore/Mysuru: Representatives from various fields have stressed the need for the much-delayed expansion of the runway of Mysore Airport at Mandakalli and to make provision for landing and take-off of Boeing planes.

Participating in Airport Advisory Committee (AAC) meeting held at the Airport premises yesterday, representatives from industries, education, tourism and other allied fields bemoaned over the delayed runway expansion. They said because of this reason, only light airplanes were being operated at this airport. Due to non-operation of Boeing airplanes, the air connectivity to important cities and States within the country and outside India had not become a reality. The runway expansion was the panacea for overall development of city, they noted.

Replying to this, Mysuru – Kodagu MP Pratap Simha, who is also the Chairman of the AAC, said that 240 acres of land was required to take up the runway expansion. As many as 114 acres of land had been acquired way back in 2012. At that time the compensation was fixed at Rs. 40 lakh per acre.  However, now the market value of land had been revised and it was fixed at Rs.1.05 crore per acre on roadside land and Rs.1.04 crore per acre for interior land. Accordingly, they required Rs.170 crore to acquire the additional land. This proposal is expected to get nod from the Union Finance Ministry next week. After that, the works such as runway expansion and airport expansion would be taken up, he added.

When Deputy Commissioner (DC) Rohini Sindhuri instructed to resume city buses from the Airport to city, an officer from KSRTC said they were operating seven buses during the arrival and departure of flights. But the service was suspended following outbreak of COVID-19 and added that the bus service would be restored soon.

READ ALSO  Congress ready for debate on development on June 29

Former President of FKCCI, Sudhakar S. Shetty said, he had been appealing the authorities to start Mysuru-Mangaluru air service for last three years.  As many as 60,000 Mangaluru-based families were settled in city and they would be benefited with the introduction of direct flight between Mysuru and Mangaluru. Besides, there was a need for road connectivity to city from all four sides, improvement of Mysuru-Malavalli Road and removal of footpath encroachment at important junctions on Ring Roads.

A representative of Travels Association said that air travellers were facing problems due to the absence of a taxi counter at the airport. When enquired to open the taxi counter, the Airport authorities have quoted the monthly rent of Rs.20,000 plus GST. If they pay this much of rent, travellers would be burdened further.

Both Simha and Sindhuri vouched the view and said it was not proper for the Airport authorities to fix that much of rent for the taxi counter. Airport Director R. Manjunath promised to take necessary step in this regard.

The DC was unhappy over yardstick being adopted by Karnataka Industrial Areas Development Board (KIADB) on acquisition of 20 acre of land for runway expansion. She said the Board has acquired the land without considering the gunta or house or plot. “Why KIADB did not first announce compensation, survey and acquire land?” She suggested the KIADB not to acquire land which has house or vacant plots, but acquire other 15 acre of land immediately and hand it over to the Airport authorities.

Upgradation as Intl. Airport in future

Mysore Airport Director R. Manjunath said the Airport will be upgraded as international airport in the coming days.  At present, 12 flights are operated of which six of them were daily. Others were being operated to different locations on different dates. The number of flights will increase if the runway was expanded and facilities will be improved as per demands of travelling public.

Suggestions also came for direct flights from Mysuru to Mumbai and Delhi. This will help in the arrival of people from abroad. Due to non-availability of this, representatives of many industries and entrepreneurs were not ready to come to Mysuru which had become a stumbling block in city development. A single flight is operated on four to five different routes causing delay in journey. On occasion, flights were cancelled in last minute and this had affected travel plans of many from other airports. This problem should be addressed immediately. A tourism Information Centre must be set up by Karnataka State Tourism Development Corporation (KSTDC) at the Airport.