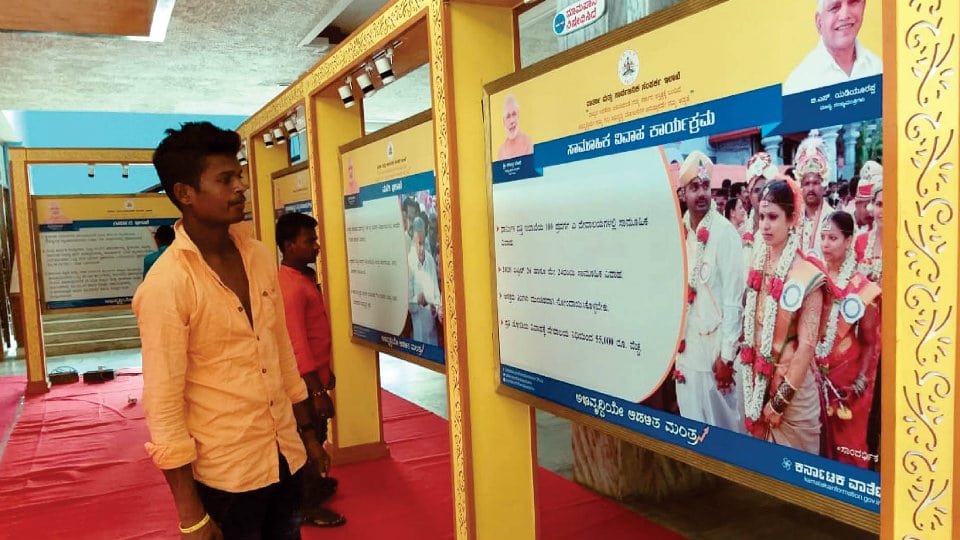 Expo on achievements of BJP Govt. opens in city

The expo is showcasing various achievements of the State Government through photo exhibition and relevant data and information to substantiate the claims is also on display.

The exhibition is highlighting various schemes and projects implemented by the State Government such as relief and rehabilitation works carried out after the rain havoc in 103 taluks of 22 districts in the State with a financial aid of Rs. 1,200 crore from the Centre and Rs. 6,450 crore from the State in an effort to reconstruct roads, provide flood relief to victims and rebuild schools, houses and other infrastructure following the devastation earlier this year.

Setting up of Karnataka Avishkara Pradhikara to help the IT/BT industry; various schemes available to fishermen with 21,000 fishermen being free of loan burden after the implementation of these schemes; various development projects being undertaken of worth Rs. 38.17 crore in the State; Rs. 98 crore loan waiver provided for weavers positively affecting lives of around 29,000 weaver families; comprehensive development projects taken up in Hyderabad-Karnataka, now called as Kalyana Karnataka covering 21 under-developed taluks in the region; setting up of task force to promote tourism industry in the State under the Chairmanship of Sudha Murty, who is the Chairperson of Infosys Foundation and various other such schemes and projects taken up by the State Government are on display.

In an effort to promote mass marriage, the State administration is also mulling on organising mass marriage ceremonies in around hundred A-Grade temples all across the State on Apr. 26 and May 24 next year for which the government aims to spend about Rs. 55,000 for each pair.

To mark its 100 days in the office, the three-day exhibition has been organised in all district headquarters of the State to highlight various schemes undertaken in the field of education, empowerment of minorities etc.