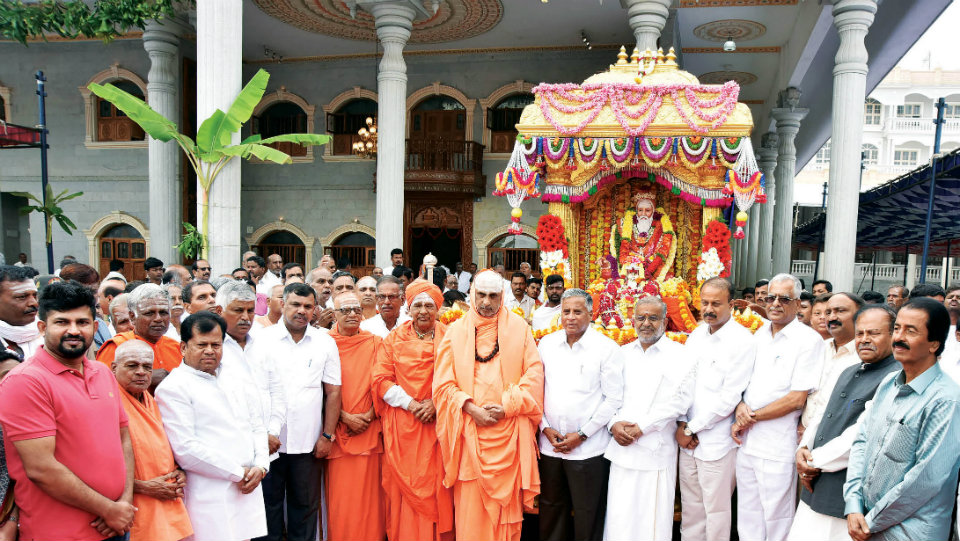 Mysuru: The 1060th Jayanti of Sri Shivarathreeshwara Shivayogi was celebrated at Suttur Sri Kshetra in Nanjangud taluk this morning.

Suttur Seer Sri Shivarathri Deshikendra Swamiji and heads of several other Mutts graced the occasion. The puja rituals began at 3 am at Karthru Gaddige with Rudrabhisheka and Sahasra Bilwa Pushparchane.

Speaking to media persons, Somanna said: “by organising such cultural events every year, Sri Kshetra Suttur is helping to pass on our rich cultural heritage to next generation.”

When asked about his willingness to disclose the details of Mysuru Dasara expenditure, he affirmed his intention to furnish a detailed account of the expenses of Nada Habba and said that he has called for a meeting in the month of January and that he will produce a comprehensive document related to expenses incurred after that meeting.

Later, the Minister released the calendar of JSS Mahavidyapeetha on the occasion.

This year, Jayanti of Sri Shivarathreeshwara Shivayogi was supposed to be celebrated in Malavalli of Mandya district, but owing to the recent flood havoc in the State, it was decided to celebrate the Jayanti in a simple manner at Sri Kshetra Suttur.