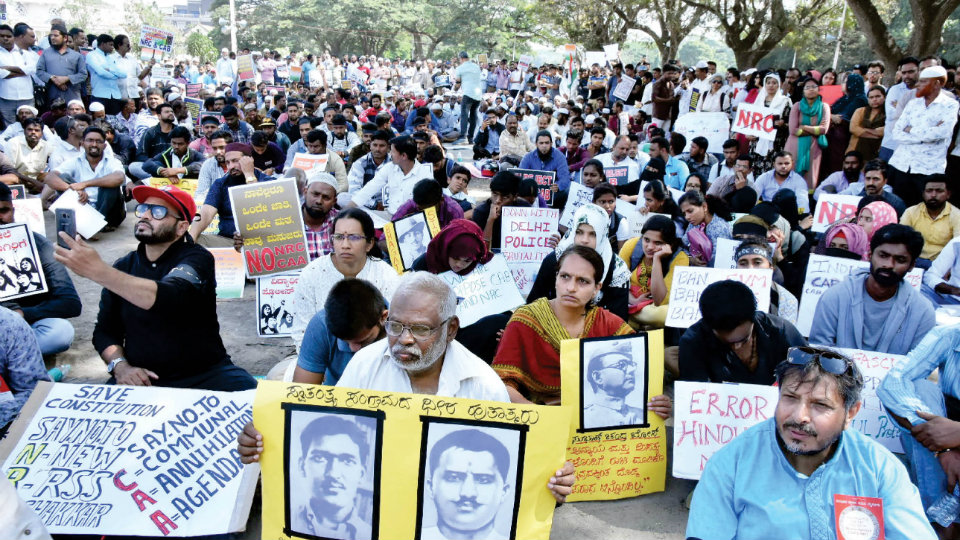 Protest meet against CAA and NRC held in city

Mysuru: About 1,000 people under the aegis of Samvidhana Rakshana Samithi congregated at Town Hall premises here this morning to voice their protest against Citizenship Amendment Act (CAA) and National Register of Citizens (NRC).

Addressing the gathering, Writer Devanur Mahadeva opined that CAA and NRC of the Central BJP Government has disturbed peace across the country. He predicted that CAA and NRC were together a bad omen for the country and pointed out that the secular value of the Indian Constitution with a historical importance is being destabilised by the Narendra Modi Government. He bemoaned that human values have been totally ignored.

Referring to NRC, Mahadeva opined that the Government would be harassing people through NRC. He wondered what documents the Principal Forest Tribes can show to defend their citizenship except showing the forest and hillocks as their authenticating ‘documents’. He observed that many students too have joined the stir against CAA and NRC but suggested them to be peaceful and aware that no anti-social elements sneak in to disturb peace. He asked people to also voice their protest against growing unemployment, continuous rise in prices of food grains and poor economy of the country.

Coming out with his thoughts, senior journalist and former Outlook Editor Krishnaprasad opined that Prime Minister Narendra Modi is adept in letting out a bunch of lies everytime confusing people. He contended that the society in general is getting spoilt by impulsive decisions of the Union Government.

He expressed an appre-hension that the country is in peril now and  wondered how the Opposition parties and Supreme Court are silent over burning issue like CAA and NRC. He regretted that IAS Officers too speak in favour of the Government.