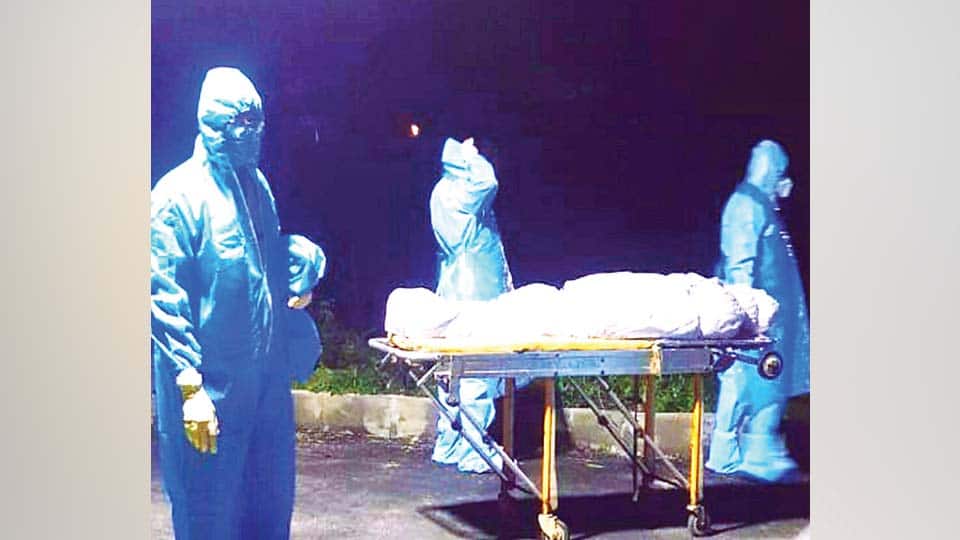 The whole of Karnataka shed tears when a few health workers literally flung the dead body of a COVID-19 patient into a pit in Ballari district some months ago. This incident triggered angry reactions from people from various walks of life and it necessitated the State Government to publish guidelines to ensure decent last rites for the COVID deceased.

But it is a totally different picture in Namma Mysuru. A team of dedicated officers worked day and night to conduct last rites without seeing caste, colour, creed or religion. With no help from citizens, a group of officers have shifted the bodies from the hospitals to burial grounds or crematoriums. Their service to the departed souls is widely appreciated by one and all. Star of Mysore brings to fore one such dedicated team which worked relentlessly for nearly five months to ensure decent last rites for COVID victims.

The Mysuru District Administration was shocked when the first death of COVID-19 patient was reported from a Private Hospital on June 25, 2020. The victim, an aged person, was from Bengaluru but came here to his daughter’s house. He was admitted to a Private Hospital after complaining of breathlessness. However, he died during treatment. Test revealed that he died of Corona.

The District Health Department did not know what to do since they knew nothing about the protocol for disposal of bodies. But they had read in newspapers and magazines that the Coronavirus will spread through the dead bodies too. This petrified many officers and they were reluctant to go near the body, let alone disposing of it carefully.

Family members were informed that last rites will be performed by officials because of chances of spreading infection to others. At that too, an Officer of Health Department volunteered to perform last rites of the deceased and shifted the body to crematorium at around 2 am.

The very next day, another person also succumbed to the Coronavirus that really sent shockwaves among the citizens in general and officials in particular. The District Administration was more worried as not a single death had happened for a month despite over 100 Corona positive cases being detected among the employees of Nanjangud factory.

After the second death, the district machinery was really worried. Disposing of the bodies posed a big challenge for them as the staff concerned refused to come forward due to fear of being contracting the deadly virus. At this juncture, the same Officer, who cremated the body of the first victim, came forward to perform last rites of the second person too.

Understanding the difficulties faced in the disposal of COVID-19 bodies, the then Deputy Commissioner Abhiram G. Sankar constituted COVID-19 Death Disposal Committee. The Committee consisted of Dr. Mohammed Shiraz Ahmed, District Tuberculosis Officer and in-charge of COVID-19 RT-PCR testing and recording results; Dr. M.S. Jayanth, Health Officer, Mysuru City Corporation (MCC); Dr. M.S. Rajesh Kumar, RMO, K.R. Hospital; Dr. Mahadeshwara Prasad, Forensic Medicine Department, District Hospital and Dr. Nayaz Pasha, RMO, District Hospital. They were actively supported by Ayub Ahmed (messiah of unclaimed bodies) and his six-member team, apart from ambulance drivers Nagaraj and Sandesh of K.R. Hospital. Anil Christy of MCC was posted at Muktidhama in Vijayanagar 4th Stage for over two months to provide PPE kits to the family members of the deceased and  also facilitate them to have a last glimpse of their near and dear ones.

Sharing his experiences in handling COVID-19 bodies, Dr. Mohammed Shiraz Ahmed said initially they too had little fear in handling dead bodies of COVID-19 victims but their fear disappeared as and when new Standard Operating Procedure (SOP) came into force. Personal Protective Equipment (PPE) kits came as a big relief for them as they would wear it from the time of collecting the bodies from both Government and Private Hospitals till the disposal of bodies — by cremating or burying. People were so scared even to look at the face of their near and dear ones before the dead bodies were laid to rest.

There were instances where people just looked at the bodies of their relatives or friends from a distance and left the crematorium or burial ground leaving the rest of the job for the officials.

“Initially, we were not allowing the family members to take the bodies to homes and everything was done by our team members with or without the presence of family members. In one incident, an aged person died and his body was shifted to crematorium. Despite offering PPE kit to one of the sons of the deceased to wear and perform last rites, that person simply vanished from the scene,” Dr. Shiraz Ahmed revealed.

Recalling another chilling experience, he said a District Surgeon and all his family members contracted Corona. A few hours after his discharge from Hospital, the Surgeon received information that his mother succumbed to COVID-19. The Surgeon had become so weak that he was unable to do anything.

“Then he called me to his house at Alanahalli around 7 pm. On that day, it was raining heavily. The Surgeon’s house was on the first floor. The deceased was little hefty. I offered PPE kits and requested the neighbours to help. The people were just watching. With no help, I along with two helpers shifted the body from the first floor to the ambulance. Seeing me carrying the body, the ambulance driver came and lent me a helping hand without the PPE kit. Finally the body was disposed of around 11 pm. Unfortunately the ambulance driver, who had touched the body, died within two days after contracting the virus,” sighed Dr. Shiraz Ahmed.

Continuing, he said though people were scared and panicked, the district team took the initiative in cremating the bodies according to Indian Council of Medical Research (ICMR) guidelines. Initially, they faced challenges and took few bodies to graveyards with Police protection. They have disposed of the bodies at midnight also during lockdown period. Even when COVID deaths happened in Private Hospitals, they would get the call to dispose of the bodies as per protocol.

During initial days, the District Administration was not allowing anyone to take COVID bodies out of Mysuru city. But from July 29 onwards, ICMR guidelines changed and allowed the bodies to be shifted inter-taluk, inter-district with an undertaking from relatives to strictly follow the guidelines. They were strictly told to give information either to the Panchayat Development Officer (PDO), Tahasildar, Taluk Health Officer or Medical Officer so that they could make necessary arrangements for last rites.

“It so happened that the burial ground was full and they had to identify another piece of land on Nanjangud Road for burial. On days, we have shifted two to three dead bodies in each ambulance. Local people used to protest but they were convinced by their respective religious leaders to cremate or bury the dead bodies. Till now, we have disposed of over 950 bodies,” he noted.

Dr. Shiraz Ahmed bemoaned that three months — July, August and September — were the worst period with a record number of casualties. People were dying within hours of admission to Hospitals. Beds were in short even for critical patients. A few were brought dead to Hospitals. Once death occurred, bodies were not handed over to relatives. Cremation or burial was done only after conducting COVID test which used to take a whole day. Till then, the bodies were wrapped by spraying disinfectants and kept in the Hospital morgue till the result came. The introduction of Rapid Antigen Test (RAT) gave early result and cremation or burial was done without much delay, he said adding “Many of my team members contracted the virus in the process. I myself got tested three times but was lucky, may be due to blessings of many people. I should also thank my family members for allowing me to work day and night without taking holiday.”