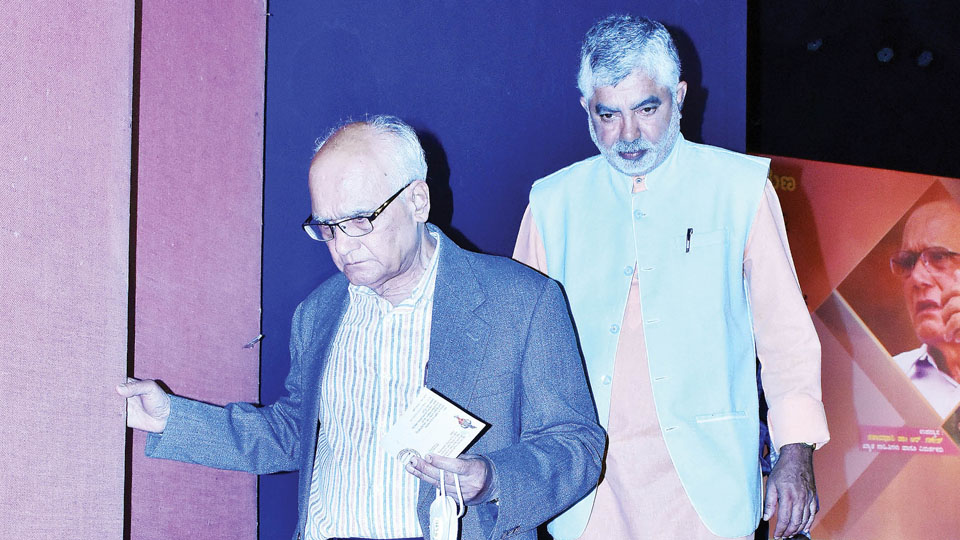 Nataka Karnataka Rangayana has made a big name in Indian theatre repertory. It has 31 years of experience and has done a lot of experiments. Now it is experimenting on staging the theatrical form of noted Kannada Novelist Dr. S.L. Bhyrappa’s greatest work ‘Parva’ written in 1979. Preparations are on to make this a milestone in the history of Indian theatre. Despite his busy schedule, Rangayana Director Addanda C. Cariappa spoke to Star of Mysore on how he got the idea of bringing ‘Parva’, one of Dr. Bhyrappa’s widely debated and popular work, into theatrical form and how to take it Pan India. Excerpts.—Ed

Star of Mysore (SOM): Tell us something about the achievements of Rangayana so far?

Cariappa: I feel it is not a big thing to stage play of any writer for two to two-and-a-half hours. In fact, amateur groups of Mysuru are doing exceptionally well in this regard. Making impossible possible is my motto. Already, we have successfully staged ‘Malegalalli Madumagalu’ and ‘Sri Ramayana Darshanam’ of Kuvempu. I wanted to do something bigger than these two projects. When I was a student of Ninasam, Peter Brook, a Director from Germany, had come. He had staged ‘Mahabharata’ play by taking artistes from all over the world. With Krishna from England, Bheema from Africa and Draupadi from India, it has been a history in world theatre. So, I thought of doing on the same lines which should be a challenge. I came here keeping that in mind. Then I thought of Dr. S.L. Bhyrappa. So far, Rangayana has not experimented Bhyrappa’s works. We have staged plays on the novels of Kuvempu, Poornachandra Tejaswi and Yashwant Chittal but not of Bhyrappa mainly because of challenges in his novels.

Cariappa: Artistes too saw this with doubt because Bhyrappa is a Rightist. But our theatre is Leftist-oriented. I don’t call it a mistake. They had that kind of a mindset. All those Directors who came here were Leftists. So in total, Mysuru Rangayana was identified in Leftist group. Opposition came when I selected the novel of a Rightist. This may have influenced our artistes. They had a bit of hesitation. When it came to selection of Director, I decided to go with Prakash Belawadi because he had come here twice to direct plays. He is a Director who can grasp intricacies in plays.

Another biggest challenge was, ‘Will Bhyrappa give permission?’ His permission is dependent on the Director. When noted playwright Dr. Girish Karnad wanted to make a film on Bhyrappa’s novel, permission was not given to him. But to B.V. Karanth, the first Director of Rangayana. So, Karnad and Karanth made the film. When I and Belawadi met Dr. Bhyrappa, the latter’s first question was how it is possible to bring his novel  into theatrical format? We told him, ‘Sir, we will make it. You first see it and then give permission.’

SOM: What kind of opposition you faced?

Cariappa: We faced a lot of opposition just because we are doing the novel of Dr. Bhyrappa. In fact, opposition came only from those associated with theatre movement with a Leftist leaning. They questioned why we should do such a mega drama. But they never questioned when ‘Malegalalli Madumagalu’ was staged. The then State Government had given Rs. 1 crore. No opposition came when ‘Sri Ramayana Darshanam’ was staged. They opposed my idea not because it was a mega play but it was Dr. Bhyrappa’s novel. War on WhatsApp started. Several groups were created. But I did not bow to pressure. There are theatre-lovers without any prejudice and isms in Mysuru.

SOM: Since how long process for this drama started?

Cariappa: We started this process almost six months ago. During lockdown, we purchased copies of ‘Parva’ and distributed it to all artistes so that they could read it at home. After reading it, they came to a conclusion that ‘Parva’ was not less than any Leftist novel. It was considered as a Rightist writing a Leftist novel. It is a big novel with special characters like Draupadi, Kunti and Gandhari who broke male chauvinism. While the author Veda Vyasa has seen ‘Mahabharata’ from a religious angle, Dr. Bhyrappa has seen it from a humanist angle. Then Belawadi took time to write the script which he has done very nicely. Then we gave the script copy to Dr. Bhyrappa who took two days’ time to read it. He was very happy. He came to Rangayana four times, gave tips to Belawadi, interacted with the artistes and also watched the drama rehearsal. Then I and Belawadi decided to make it a milestone in Indian theatre. This drama required many artistes and finance. Rangayana requires Rs. 3.5 crore for the whole year, but the Government just gave us Rs. 94 lakh due to Covid. We were a little worried about the money to stage this drama. With that money, it was not possible to stage ‘Parva.’ Then, we had only 12 senior artistes, not sufficient to play such a big drama. So we selected artistes from Amateur Theatre Groups and now our strength stands at 40. We have involved celebrities too. International fashion designer, Prasad Bidapa, has done costume design, Sankeerthi Aipanjiguly – Props and Ravi Mooruru of Bigg Boss-fame – Music. We told the Government that this is the biggest honour that they can give to a 90-year-old novelist. Subsequently, the Government released Rs. 1 crore.

After we took up this project, PM Narendra Modi, while addressing an international forum, had named ten best novels of all times to be translated into foreign languages, and Dr. Bhyrappa’s ‘Parva’ has been one among them. Accordingly, it has been translated into Russian and Chinese languages, and released. Like Shakespeare’s plays, ‘Parva’ is relevant all times.

SOM: How will you take forward the drama?

Cariappa: We want to take forward for one year without break. I  have plans to take up this with the Government of  India, and explain this to PM Modi to promote this at national-level. I will request Union Human Resources Development Ministry to help in this endeavour. The sub-titles for the whole play in different languages will be readied and staged across the country. As the artistes will be delivering dialogues on the stage, the same will be appearing in sub-title.

SOM: Is Dr. Bhyrappa coming to watch the play on first day?

Cariappa: Do you know what Bhyrappa has done? He has already bought the first ticket as he did not want to watch free of cost. Our ticket sale is good. Nearly 65 percent of tickets are already sold out for Kalamandira show. In Bhoomigeeta, it will be held from March 25 and there are only 200 seats.

SOM: What is the total duration of the drama?

Cariappa: This is a seven-and-a-half-hour play. The play begins at 10 am and concludes at 6.30 pm with four breaks in between — three tea breaks of 10-minute each and a lunch break of 30-minute. For the convenience of audience, we have given two options — to watch for seven-and-a-half-hour or episode-wise — Adi Parva, Niyoga Parva and Yuddha Parva. All these three episodes make ‘Maha Parva.’ On  March 12, 13 and 14, we are staging the full drama at Kalamandira. Episodes will be staged for three days at Bhoomigeeta at 6.30 pm with a duration of 2.5 hours on Thursday, Friday and Saturday. It is not a mega but Rangayana’s milestone in Indian theatre. Noted Film Director Seshadri is doing ‘Making of Parva’ and has completed 50 percent shooting.

SOM: Why can’t you take this to intl. level since the novels of Bhyrappa are translated into several languages?

Cariappa: It can be done…but I don’t know about present COVID situation. This play can definitely be staged during ‘AKKA Sammelana’ in USA. We can think about it also. At national level, we will be staging it at Varanasi, Delhi, Gujarat, an Eastern State and in Mumbai.

SOM: For one year, how are you going to stage the play?

Cariappa: Up to May, it will be staged in Mysuru. Then artistes will be given one month leave. Then we will workout tour plans and concentrate on ten cities within Karnataka. In each place, we will stay for four to five days and stage two full plays. In total, our endeavour is to stage 25 shows full in Karnataka and 25 in other States. We are concentrating on big theatres with seating capacity of over 1,000 audience.

SOM: Why can’t you involve artistes of other Rangayana branches in your projects so that they too will get exposure?

Cariappa: We don’t have such plans. They are busy in their own activities. They have separate Directors. One Director cannot do everything. In our given space, we have thought about it and executing it. I was a bit hesitant in the beginning but now I am confident. Since Rs. 50 lakh given by the State Govt. is not sufficient to undertake our tour, we are planning to approach Culture Dept. of each State to call them as State Guests. After May, we are planning to meet PM Modi and invite him to watch the play at NSD, New Delhi.

SOM: After ‘Parva’ what next?

Cariappa: Not planned yet. Time and situations will decide.

SOM: What about expansion of Rangayana?

Cariappa: Now Rangayana has grown a lot. We need more space to expand our activities. Proposal is there to seek the authorities of University of Mysore to give land from Kukkarahallli Lake side but nothing is finalised.

Addanda C. Cariappa Dr. S.L. Bhyrappa Parva Rangayana Shyam Sundar Vattam
Englishmen Crumbled like a Castle of Cards to concede 3- series victory to our boys
“My life will change, if I win”