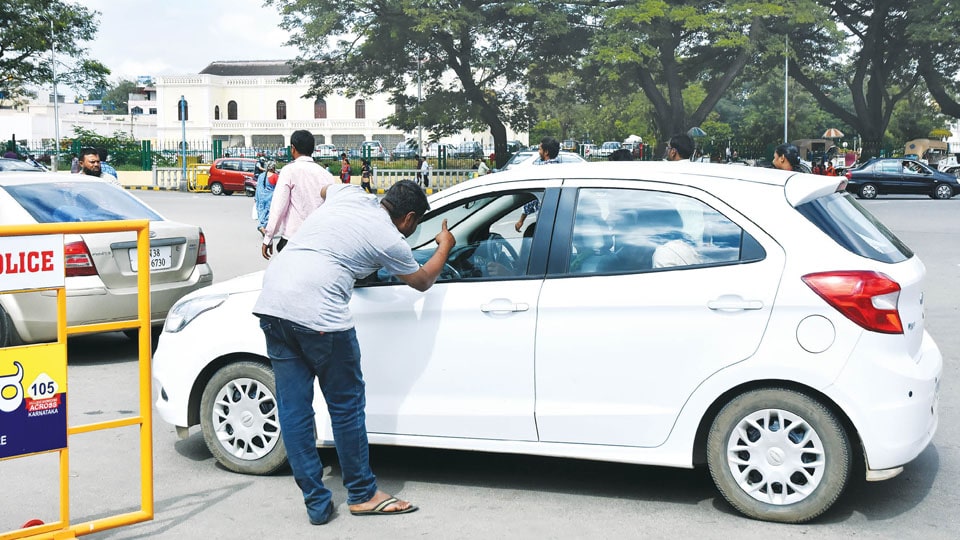 Mysuru: Fake tourist guides are running a cartel in city where tourists are misguided and taken to various private business establishments and entertainment zones for the handsome commission they offer besides fleecing them.

Out-of-State tourists or outstation visitors are dissuaded from visiting the Mysore Palace and other locations of tourist interest in city and they are taken to select private handicrafts, silk and sandalwood sculpture outlets and amusement parks.

These guides are neither appointed by the Department of Tourism nor the Archaeological Survey of India. They stand at vantage places like Hardinge Circle, near Dasara Exhibition entry gates, Ittigegud Durga Parameshwari Temple, Toll Gate, behind Gun House on Nanjangud Road and near Fountain Circle.

As soon as they spot vehicles bearing Registration Number plates of Kerala, Tamil Nadu, Maharashtra and Telangana heading towards the Palace, one of the guides approaches them and tells them that the Palace is closed for the day for some ceremony and instead, they need not waste their time and could visit exquisite handicraft and silk saree stores. They also promise them that they will be taken to other tourist destinations after their shopping and make extra money.

The tourists inside the vehicle get easily convinced and they ask the guide to lead them towards those outlets. Once the tourists land at the outlets, these guides are offered handsome commission. There are 20 to 30 people doing this business around the Palace and Hardinge Circle. These people either sit inside the tourist vehicle or ask the vehicle to follow their bike and then extort money from the tourists on the pretext of helping them. Even some auto drivers are also misguiding and fleecing the tourists.

These touts are well-versed in regional languages and seeing this skill, many tourists fall for the trap. Apart from about 50 licenced tourist guides, the Department of Tourism has appointed 13 Pravasi Mithra Guards — Five Guards around the Palace, five atop Chamundi Hill, one in Nanjangud and two near  Sri Chamarajendra Zoological Gardens (Mysuru Zoo). They can easily be identified by their khaki uniform and they sport Tourism Department band on their arms. They have even been provided identity cards.

Some auto drivers and touts station themselves outside hotels in the morning where tourists usually have breakfast and then convince them to go in their auto to private outlets where handicrafts are sold. Tourists are convinced that these outlets are genuine and are recognised by the Governments.

To stop this menace, Mysore Palace authorities have installed an auto-play audio at the Varaha Gate of the Palace that constantly warns tourists to be careful about such touts. The audio, repeatedly played in Kannada, English and Hindi, advises tourists to approach “Pravasi Mithras Guards” who are officially appointed.

Reacting on the issue, Deputy Director of Tourism Department H. Janardhan told Star of Mysore that tourists must insist on identity cards if anyone approaches them as tourist guides. “Touts are present at all the tourist places. We can find them even at the Taj in Agra and Ajanta – Ellora caves in Maharashtra. Licenced tourist guides have been given ID cards. There are over 50 tourist guides at various spots who have been recognised by the Tourism Department and licences are issued to them. Every tourist must check the credentials before agreeing for a tour,” he said.

Some tourists have mentioned how they were fleeced by touts in the Visitor Feedback Book that is maintained by “Pravasi Mithra Guards,” the Government-appointed Guards, who are present at tourists places around the city to guide the tourists.

Once such tourist, who got fleeced and wrote about it in the Feedback Book is Udaya Lakshmi, a Sub-Inspector (SI) at Finger Print Bureau (FPB) in Andhra Pradesh. Her feedback written on  Dec. 4 is as follows: “Some auto person and one person on a scooter told us that today due to Maharaja’s wedding anniversary, Palace temple darshan will be closed till 10 am. So visit Chandan Factory and Silk Saree factory up to 12 pm. So we visited Chandan, Silk Factory outlets.”

Another visitor J.N. Ashit has written: “Autorickshaw driver misguided us saying that the Palace will be closed till noon and took us to a shop saying that it is ‘Rani Palace.’  He made us park our vehicle far away and gave us a ride in his autorickshaw for no reason.” Ashit even mentions the autorickshaw registration number and also his phone number in the book.

‘Issue brought to the notice of Police’

When SOM contacted Mysore Palace Board Deputy Director T.S. Subramanya, he said that it has come to his notice that touts are dissuading tourists from entering the Palace by lying that the Palace is closed for some ceremony and then taking them to souvenir shops instead.

“This is a problem and many tourists have submitted written complaints to me and also have recorded their displeasure in the ‘Pravasi Mithra Visitor Feedback Book.’ I have not only written to the City Police Commissioner but also brought the issue to the notice of Kumar Pushkar, Managing Director of Karnataka State Tourism Development Corporation. These touts in nexus with private handicraft showrooms not only deny business to Government-recognised showrooms but also bring a bad name to Mysuru products by selling fake items,” he said.