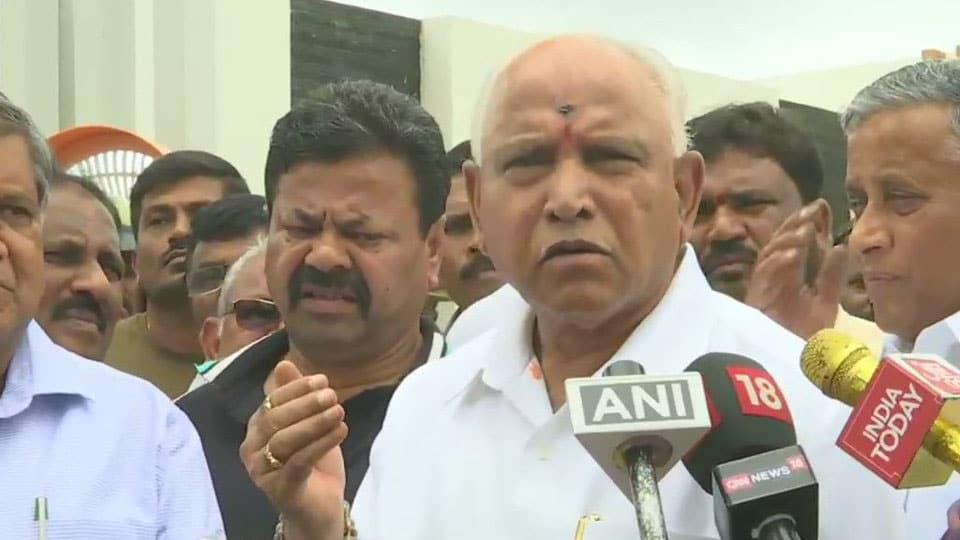 Bengaluru:  A day after the by-election results were out, all the 11 disqualified MLAs, who were elected on a BJP ticket in the Dec.5 by-polls, made a beeline to the Dollar’s Colony residence of Chief Minister B.S. Yediyurappa here this morning to seek Cabinet berths for them. The MLAs, who included former Minister and disqualified legislator R. Shankar, came in groups to ‘Dhavalagiri,’ the private residence of the CM, placed their demand for Cabinet berths as assured by the Party  earlier.

They also demanded berths for two other disqualified MLAs — A.H. Vishwanath (Hunsur) and MTB Nagaraj (Hoskote)— who lost the by-polls.

After them, it was the turn of senior party MLAs to seek Cabinet berths. Umesh Katti (Hukkeri), S.A. Ramdas (K.R. Constituency in Mysuru), Raju Gouda aka Narasimha Nayak (Surapur) and M.P. Kumaraswamy (Mudigere) met Yediyurappa and demanded Cabinet berths in the next Ministry expansion.

The Chief Minister, who is delighted with the by-poll results, is now faced with a challenge of Cabinet rejig. Yediyurappa’s Cabinet presently has 18 Ministers, including the CM and there are only 16 Cabinet berths to be filled. With both the newly-elected disqualified MLAs and other  loyal party legislators waiting in the wings to make it into the Cabinet, the CM is in a dilemma.

CM to Delhi: Meanwhile with the BJP getting a comfortable majority on its own after the by-polls, CM Yediyurappa is likely to fly to New Delhi in a couple of days to meet the Party’s National leaders and discuss the Cabinet expansion issue.

READ ALSO  Too many aspirants for Ministerial berth: BSY under stress

But sources in New Delhi said that the BJP top brass,  which is busily engaged in Jharkhand Assembly polls, is not in a hurry and is likely to give the go-ahead for the State Cabinet expansion only after mid-January, 2020. In such a case, the Ministerial aspirants have to wait for more than a month to get into the Cabinet.

Amidst speculations about the imminent Cabinet  expansion, the State may also see two more Deputy Chief Ministers, apart from the three functioning now. The State may perhaps follow the neighbouring Andhra Pradesh model, where there are five Deputy Chief Ministers, with representation to all macro communities. The BJP is said to have promised the Deputy Chief Minister post to senior leaders Ramesh Jarkiholi of Gokak and A.H. Vishwanath of Hunsur, who triggered the collapse of the JD(S)-Congress coalition Government. With Vishwanath losing the by-polls and the BJP High Command not too interested in having more than three Deputy CMs, it will be interesting to watch what Yediyurappa will do to keep the promise of Cabinet berths to all elected disqualified legislators and as well as R. Shankar, another disqualified legislator who chose not to contest the by-polls, after he was promised a MLC seat.

However, Chief Minister B.S. Yediyurappa, who spoke to press persons after garlanding the statue of former Chief Minister S. Nijalingappa on his birth anniversary at Vidhana Soudha this morning, said that all the eleven disqualified MLAs who were elected on a BJP ticket in the just-concluded by- polls and Shankar, will be inducted into his Cabinet shortly.

Asserting that the promise made to all the disqualified legislators will be met, the CM said that he will be leaving for New Delhi in a couple of days to sort out issues concerning Cabinet expansion.