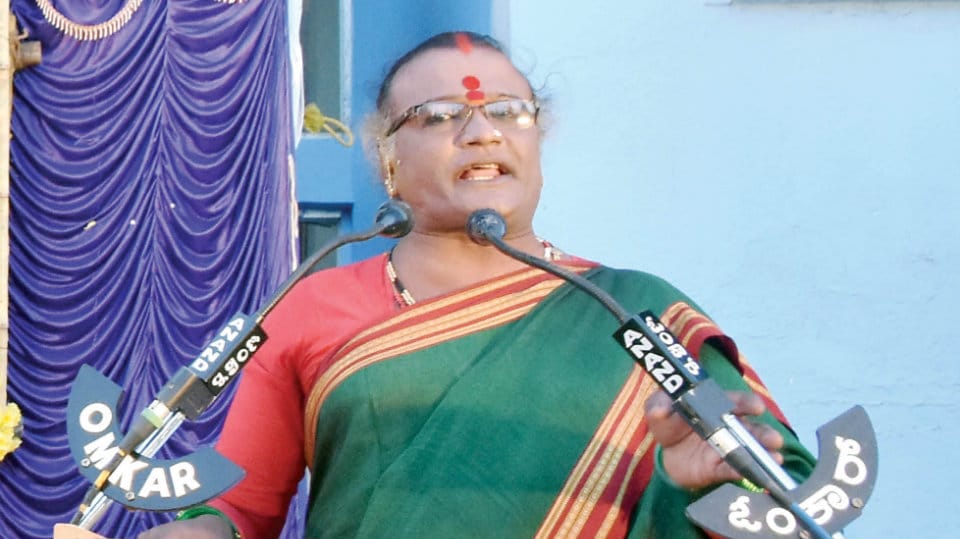 From Manjunath to Manjamma to President of Karnataka Janapada Academy, it was not a bed of roses

Mysore/Mysuru: From a runaway beggar to being the first trans-President of Karnataka Janapada Academy, Manjamma’s extraordinary life story is a part of the school syllabus today. Manjamma is heading the only surviving Jogati troupe. Jogati Nritya is a ritual dance performed by Jogappas, a community of transgender people in North Karnataka and in some parts of Andhra Pradesh.

A recipient of the Rajyotsava Award and the Janapada Academy Award, Manjamma Jogati was in city yesterday to inaugurate Bahuroopi Janapadotsava. The renowned practitioner of Jogati Nritya shares with Star of Mysore her painful journey from a runaway beggar to heading the State’s top institution for folk arts.

Born Manjunath Shetty in Kallukamba village, Kurugodu taluk near Ballari in an Arya Vaishya family, Manjamma’s life did not begin as everybody else. Out of 21 children born, only 5 were alive for his parents. As a teenager, Manjunath began to identify himself as a female, which shocked everyone in his family. “My brothers would beat me and my family tried hard to get rid of my feminine tendencies. I was 15 at that time. When I decided to embrace my identity as a woman, my father had even cursed me saying that I was dead to him. I have even tried to consume poison,” she recalls.

“They took me to a doctor and later a priest convinced my parents to leave me alone as I have been blessed by some divine power. Finally, they dedicated me as a Jogappa in Huligeyamma Temple near Hospet. That is how I became Manjamma Jogati. And I left home and started begging for a livelihood. At that time, there was no end for my miseries. Some youngsters had even raped me. There was no food or proper shelter either,” Manjamma said.

“I have passed tenth standard, have worked as a pigmy collector in Nandi Finance in Ballari for two years and have even sold idlis on the street. At that time, I met a folk artiste by name Mattikal Basappa and I learned this Jogati Nritya from him. A transgender and a Jogati Nritya performer, Kalavva Jogati, also has taught me this dance form. This art form is a ritual dance performed to appease Goddess Yellamma and is generally performed by a group of transgenders, known as Jogappas. I learned Choudaki Pada, Jogati Nritya and other dance forms.’’ she added.

“In 1990s, I formed my own team of Jogatis comprising 13 members. I have also acted in a number of dramas. I was very well known on stage as Parashurama, Bhasmasura, Tarakasura, Sangavva, Kamadhenu, as Gowdasani in Renuka Devi Mahatme,” she said. Today, she is a recipient of the Rajyotsava Award and the Janapada Academy award, a recognised artiste from the Government.

When Star of Mysore asked her about her advice to the society and transgender, she said, “If a family accepts a transgender person, the society would follow the same steps and respect them. You need to accept transgender persons first and provide them jobs, as they are doing in other States, so that they would not become a sex worker or a beggar or involve in any unlawful activities. I would like to advice transgender persons to get a proper education which would help them get jobs and lead a decent life.”