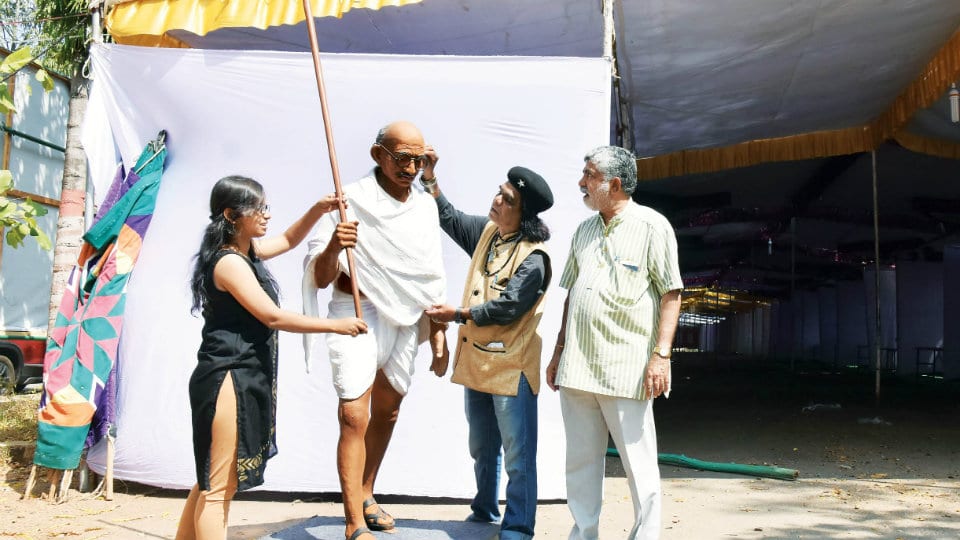 Bahuroopi on Gandhi Patha set to be steered by Addanda Cariappa

The six-day festival will be inaugurated by Actor Anant Nag this evening.

The festival will unfold in the decked-up premises of Rangayana this evening and what is special this year is the festival theme of Gandhi Patha (Gandhi Path), coinciding with Mahatma Gandhi’s 150th birth anniversary celebrations.

The festival will bring to light the life and times of the Mahatma in various forms, including plays, bhajans, photographs and symposiums.

The festival is being spearheaded by Rangayana Director Addanda C. Cariappa, who will tread on the path laid by Ranga Bheeshma B.V. Karanth (whose brainchild was Rangayana) and former Directors C. Basavalingiah, Prasanna and Chidambararao Jambe and others.

The theme Gandhi Patha is sure to attract the attention of theatre personalities and drama lovers who had been yearning for a unique theme and the 150th birth anniversary celebrations of the Mahatma has provided the opportunity for a much-needed change.

Life and times of the Mahatma

The festival will provide a platform for many multilingual plays concentrating on Gandhiji, Satyagraha and simple living style, a photography expo featuring the life and times of the Mahatma, a national symposium on Gandhi’s thoughts and life, a film festival, the recital of soul-stirring bhajans, a poetry recitation (how poets see Gandhi), theatre music and folk performances, street plays, Yakshagana performances, leather puppetry and books and handicrafts expo will be a part of the theme.

Also, there will be live demonstrations of indigenous hand-crafts and desi food will be served in indigenous food huts at the festival that will serve lip-smacking native food elaborately chosen from the rural areas.

READ ALSO  Demand for books on drama at Bahuroopi

As there was a sudden change in Governments and following the appointment of Addanda C. Cariappa as the Rangayana Director, the Bahuroopi festival had to be postponed to February from the earlier-scheduled January. Though there was little time for the director to steer things, the festival will begin in right earnest this evening, thanks to the vast experience of Cariappa who single-handedly built theatre in his home district of Kodagu.

Having more than 40 years of experience in theatre, art and culture, Cariappa has several works in Kannada and Kodava languages to his credit. He is active in film and television as well. He has been the Chairman of Karnataka Kodava Sahitya Academy and member of Karnataka Nataka Academy earlier.

A big name in Kodava theatre

Cariappa obtained formal training in theatre from School of Drama, Heggodu and he is a big name in Kodava language theatre and has carved a niche for himself in the State Theatre. A multi-faceted talent, he is credited with giving a new dimension to Kodava theatre after Haradasa Appaneravanda Appacha Kavi.

He built ‘Srishti Kodagu Ranga’ repertoire in Kodagu that was a mix of Kannada and Kodava language — a first-of-its kind experiment — and ran it for 12 years without single rupee assistance from the Government.

Cariappa has been credited for transforming Kodava theatre into a vital link between Kodava and Kannada languages and he is also known for having made significant contributions to Kodava language, theatre, films, etc. He has directed over more than 75 dramas in Kodava and Kannada and directed two Kodava films.

He is known as a playwright who does not compromise on quality and does his best to convey the intended social message through his plays. Some of his plays he has scripted, performed and directed are, “Kodagina Koneya Arasa”, “Purusha”, “Swathanthra Yodha Chengappa”, “Vyavasthe”, “Marukalisida Hejje”, “Dewan Bopanna”, “Amarakavi Appacha”, “Badk”, “Jamma”, “Kall”, “Militarikaara” and others.

Cariappa has also directed and performed in many plays based on William Shakespeare’s “Macbeth”, “Hamlet”, T.P. Kailasam’s “Poli Kitti” and “Tollu-Gatti” and Poornachandra Tejaswi’s “Thabarana Kathe”. He is the recipient of “Bhasha Samman” Award given away by the Kendra Sahitya Academy.

A notable contribution of Cariappa is bringing tribals into the mainstream of the society. He used to stay in tribal haadis of Kodagu where Yeravas, Kurubas and Jenu-Kurubas stayed, mixed with them, understood their language, culture and food habits and brought them to the fore through theatre.