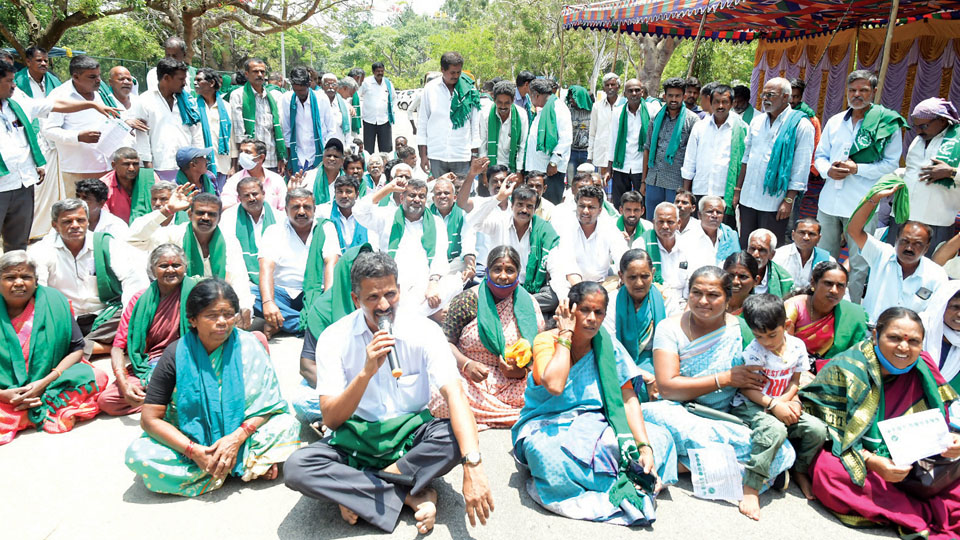 Mysore/Mysuru: Seeking fulfillment of their various demands, hundreds of farmers from across Mysuru district, under the banner of Karnataka Rajya Raitha Sangha (KRRS), staged a massive protest in front of the Deputy Commissioner’s Office here this morning, as part of a Statewide agitation.

The demands include supply of quality power to irrigation pumpsets, waiver of power bills and uninterrupted continuance of  Bhagya Jyothi and  Kuteera Jyothi schemes, sufficient supply of sowing seeds, rendering  justice to farmers of Kochanahalli in Nanjangud taluk who had parted with their land for Industries, withdrawal of penalties on tobacco farmers who are selling the produce below their stipulated  quota, reduction of fertiliser prices and granting permission for submission of Darakhastu applications, among others.

Alleging that the Government was penalising overgrowing or undergrowing tobacco farmers, he urged the authorities to stop penalising farmers and come to their rescue by paying a remunerative price for the produce. The protest was held at all district headquarters of the State.

Claiming that farmers who parted with their land for industries at Kochanahalli are being cheated in respect of compensation, Nagendra warned of staging a demonstration in front of the Mega Kaigarika Adalat  that is scheduled to take place at KSOU Convocation Hall on Thursday (Apr.28), in which Industries Minister Murugesh Nirani will participate.