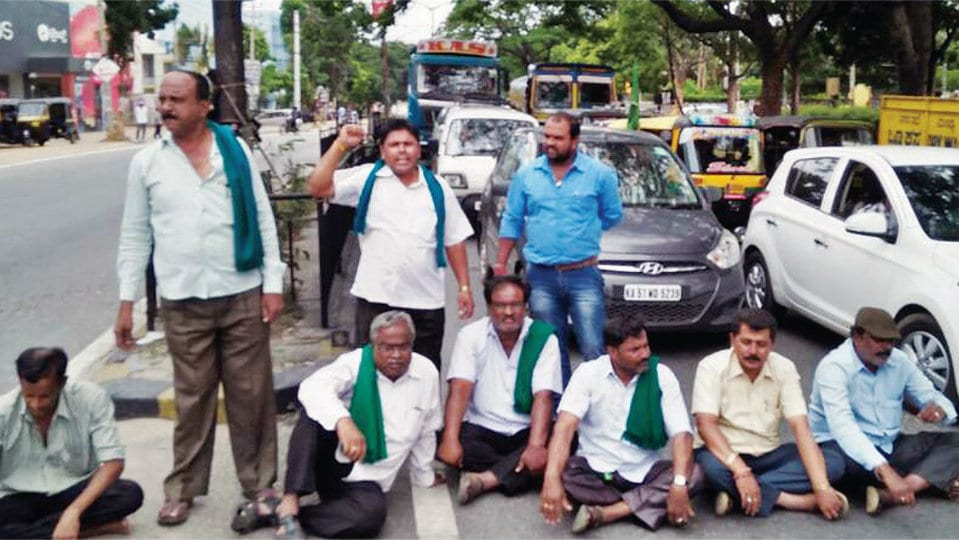 Farmers to block Highways on Feb.6

Mysore/Mysuru: Accusing the Centre of using oppressive measures against the agitating Farmer Unions, which have been staging protests along the Delhi border seeking repealment of newly introduced three Farm Laws, the Karnataka Rajya Raitha Sangha (KRRS) will block all Highways in the State on Feb. 6 in support of the agitating farmers.

Announcing this at a press meet here on Wednesday, KRRS President Badagalapura Nagendra said that the farmers in the State will block all Highways from 12 noon to 3 pm on Feb. 6. Maintaining that the Centre’s actions to choke the farmers agitation has crossed all limits, Nagendra alleged that the Centre had resorted to hitherto unseen tactics out of frustration.

Asserting that the farming community has stood up to the Centre’s pro-corporate policies, Nagendra likened the ongoing farmers’ agitation to that of second freedom struggle.

Accusing the Centre of levying agricultural cess on almost all commodities as a tactic to create a divide between the common man and farmers, he alleged that the Centre was only favouring corporate entities, while ignoring the plight of farmers and as well as the common man.

He further said that a farmer sensitisation programme will be organised across the State on Feb. 13 marking the birth anniversary of late farmer leader Prof. M.D. Nanjundaswamy.

KRRS office-bearers Hoskote Basavaraj and P. Marankaiah were present at the press meet.

Meanwhile, Karnataka State Sugarcane Growers Association too has expressed support to the Statewide Highway Bandh on Feb. 6. Disclosing this here on Wednesday, Association State President Kurubur Shanthakumar said that farmers under the banner of Raitha, Dalita, Karmika Aikya Horata Samithi will resort to Highway blockade on Feb. 6 in response to the nationwide call given by Samyukt Kisan Morcha.