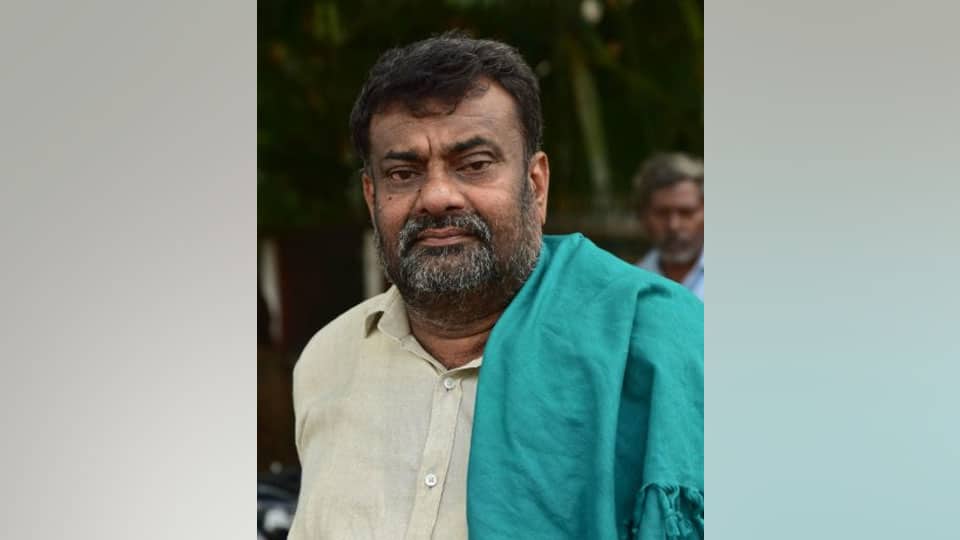 Farmers to take out Raj Bhavan Chalo in July first week, protest in city on June 24

Mysuru: The members of Karnataka Rajya Raitha Sangha (KRRS) have decided to hold a Raj Bhavan Chalo in July first week condemning the failure of State Government to tackle drought prevailing across the State.

Speaking to reporters at Pathrakarthara Bhavan here recently, Raitha Sangha State Unit President Badagalapura Nagendra said that farmers will also hold another protest in Mysuru on June 24 at 11 am prior to this stir.  They will take out a protest march from Gun House Circle to the Office of Deputy Commissioner to draw the attention of the Government to look into their demands.

He said almost all parts of the State including Mumbai-Karnataka, Hyderabad-Karnataka, coastal and Mysuru region were severely affected by drought and drinking water problem.

Farmers are migrating to cities in search of alternative jobs as the Government has failed to ease drinking water crisis and delay in taking up drought relief. Despite Government warning, banks are issuing loan recovery notices to farmers.

The ruling party leaders are involved in infighting to save their posts, neglecting to protect the interest of farmers.  Even Opposition leaders have failed to discharge their Constitutional responsibility effectively.

“With all these issues, the farmers will take out Raj Bhavan Chalo seeking the intervention of Governor of Karnataka to bail the farmers from crisis”, he said.

Nagendra has  urged the Government to clear the dues of sugarcane growers. Government must give permission to start cane crushing in Mandya, Pandavapura and Chunchanakatte Sugar Factories.

He demanded the Government to release a white paper on loan waiver announcement besides to stop bringing amendment for the Contract Labour (Regulation & Abolition) Act, to open paddy procurement centres, to shift power grid lines from farm lands and to clear encroachments on Government lands.

A meeting of pepper and coffee growers to discuss their problems will be held on June 23 at 11 am at Gonikoppa.  District Raitha Sangha General Secretary Hosakote Basavaraju, leaders H.C. Lokeshraj Urs, Basavegowda and others were present.

Raj Bhavan Chalo
One Nation, one Election: Do it now, tomorrow it may be too late !
Man arrested for robbing lady FB friend