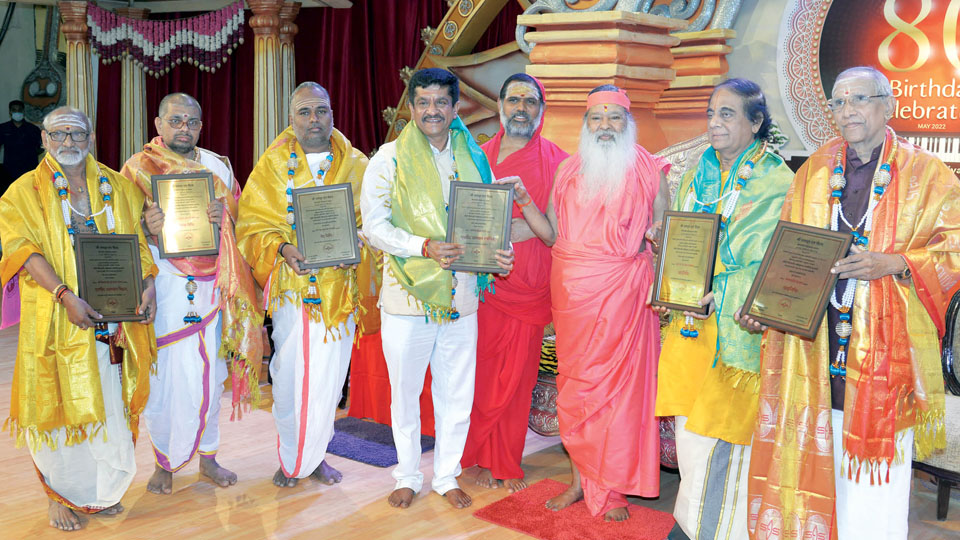 Mysore/Mysuru: Six Vedic and Music Scholars were felicitated at the ‘Chaitanya Archana’ programme on the second day of the 10-day 80th birthday celebrations of Sri Gananpathy Sachchidananda Swamiji at the Ashram premises on Nanjangud Road here this morning.

Speaking on the occasion, Sri Ganapathy Sachchidananda Swamiji said that the Scholars have been felicitated during the ‘Chaitanya Archana’ programme. Pointing out that Nada, Veda and Yoga are important for leading a contentful  life, the Swamiji said that the Ashram is relentlessly carrying out social activities such as — Vidyadaana, Annadaana and Jnanadaana, which are very much liked by Gurudev Dutta.

Noting that all those feted today were scholars who have excelled in their chosen field, he said that with this, it is hoped  everyone of us imbibe atleast a part of their scholarly knowledge.  By worshipping  Gurudev Dutta, everyone will get a feeling that the almighty’s blessing are with us, he added.

Later in the evening (6.30 pm) today, a Bhajan programme  and a musical concert will  take place. The ten-day celebrations will conclude on May 31.