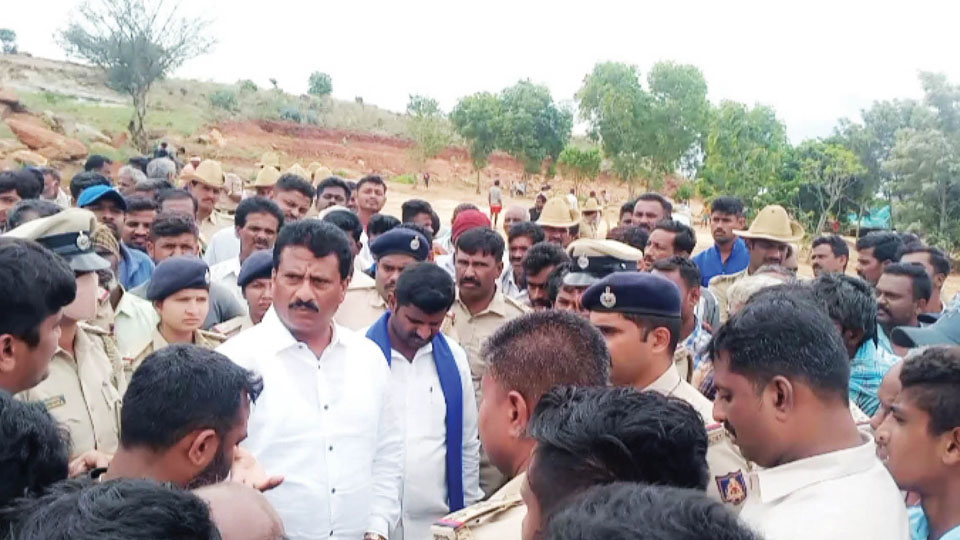 Nagamangala: Accusing the police of negligence and irresponsibility in the murder case of farmer N.R. Mohan of Naragalu village in the taluk, who was kidnapped and murdered on May 15 for not letting his farmland for mining activities, family members of the deceased Mohan and villagers of Naragalu staged a massive stir by keeping the body of  Mohan near a stone quarry at Kenchagonahalli village on Sunday, demanding the suspension of Bindiganavile PSI Sridhar.

N.R. Mohan, a farmer of Naragalu village was allegedly kidnapped in a Maruti Omni van and strangulated to death by Tamil Nadu based Miner Raju and his associate Kumar of Naragalu village, when he went to his farmland to herd his cattle back to home on the afternoon of May 15. Mohan’s body which was buried by the accused in a village in Holenarasipur taluk, was exhumed on Saturday in the presence of Holenarasipur Tahsildar.

As the crowd at the stir site (Kenchagonahalli) swelled with each passing hour and with the protestors insisting that the last rites of the deceased Mohan will not be conducted until the PSI was suspended, the Police tightened security at the spot and as well at other villages in the vicinity. Tension  and commotion prevailed  at the spot for some time as the protestors argued with the police and local political leaders, questioning them on their failure to take action against what they claimed illegal mining in the area.  MLA Suresh Gowda and former Minister Cheluvarayaswamy too visited the village and tried to pacify the agitated protestors, who also included members of Dalit Sangharsha Samiti (DSS).

Urging the police to arrest all the accused and suspend Bindiganavile PSI Sridhar for his negligence, the protestors remained unmoved despite several attempts by the Police and Local political leaders to convince them. Thereafter, MLA Suresh Gowda along with Additional SP Venugopal held talks with the protestors later in the afternoon. Following assurance from ASP Venugopal that the PSI Sridhar will be suspended in a couple of days, the villagers withdrew their stir and also agreed to conduct the last rites of the deceased Mohan, with a warning that they would again stage a stir in front of the SP Office at Mandya if no action on their demand is taken, as promised by the authorities. Mohan’s last rites were conducted amid tears and sorrowful scenes at the space adjacent to the farmland of one of the murder accused Kumar, at Naragalu late in the evening yesterday.