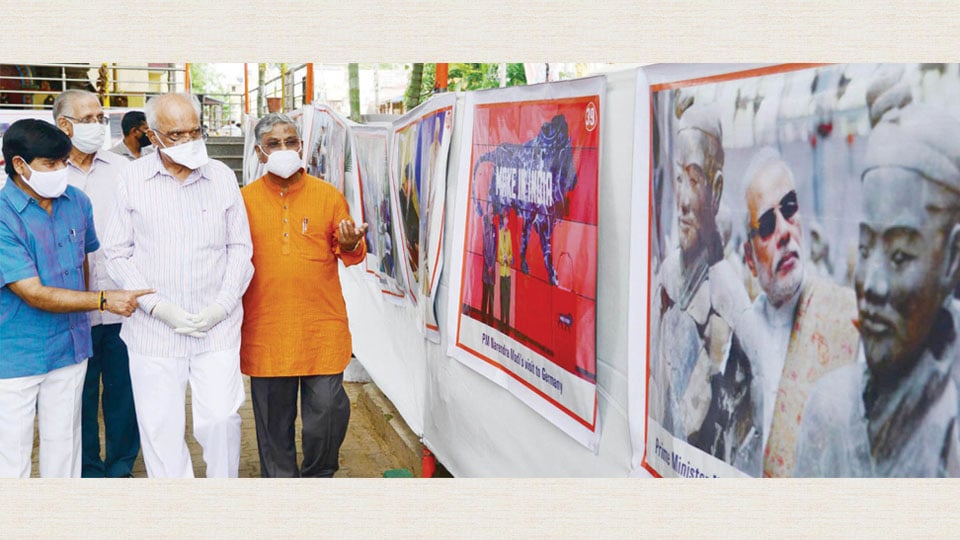 Krishnaraja MLA S.A. Ramdas is celebrating the day as ‘Namo Divas’ and held a host of programmes at a park in front of his party office. Noted Kannada litterateur Dr. S.L. Bhyrappa inaugurated the celebrations and also launched an App containing information about all Central Government schemes.

Dr. Bhyrappa said he was watching the political system post-independence and has never seen a Prime Minister like Modi who is striving hard for the overall development of the nation. Understanding the importance of technology, the PM is laying a lot of stress on the same. “India’s economy would have been at the pinnacle if COVID-19 pandemic had not struck. The Coronavirus situation is managed well by Modi in the last six months,” Dr. Bhyrappa observed.

On this occasion, ‘Seemantha’ for 10 pregnant women was performed. Five ladies conducted ‘Anna Prashana’ for their kids. Uniforms and books were distributed to children and 70 COVID warriors were honoured.

In Chamaraja Constituency, MLA L. Nagendra felicitated 70 COVID warriors at an event held at Basavanagudi Circle in Hebbal. Nagendra hailed Prime Minister Modi for taking historical decisions like abrogation of Article 370, abolition of Triple Talaq and said the era of development begun in 2014 after Modi came to power.

On the occasion, BJP workers led by City Unit President T.S. Srivatsa painted a 170-year-old Kaadu Basaveshwara Temple near Columbia Asia Hospital on the Mysuru-Bengaluru Highway. They removed weeds and shrubs around the temple.

Legend says that the temple, with the idol of Basava (bull) was built around 1849 AD during the rule of Wadiyars. Hero stones are also found on the premises. The BJP Backward Classes Morcha had arranged the cleaning activities as part of Swachh Bharat Andolan.