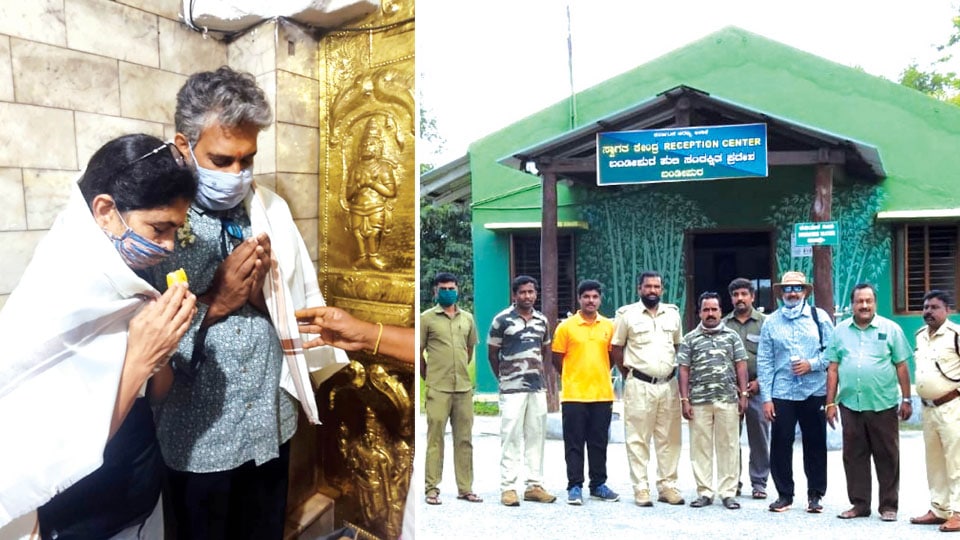 Gundlupet: Renowned filmmaker of ‘Baahubali’ fame S.S. Rajamouli and his wife Rama, visited Himavad Gopalaswamy Hill yesterday and prayed at the temple atop the hill dedicated to Lord Venugopalaswamy. The couple also visited Bandipur Tiger Reserve and explored the wildlife.

According to sources, Rajamouli, who reached Gundlupet on Tuesday, stayed at a resort in Kaniyanapura, Gunlupet taluk. The couple went on a safari at Bandipur on Wednesday morning and later visited Himavad Gopalaswamy Hill and offered prayers at Venugopalaswamy Temple. Chief Priest Gopala Krishna Bhat performed special puja and offered a shawl to the couple, as a mark of respect.

The couple, who went around the temple for some time, enjoyed the nature and were guided by the Forest Department officials.

The couple later visited Bandipur Tiger Reserve and went on a safari in the Forest Department vehicle for more than an hour during which they spotted a herd of elephants, bison, deer and other wild animals.

A native of Karnataka, Rajamouli met Bandipur Project Tiger Director T. Balachandra and spent some time with him collecting information about the wildlife.

He then took photos with the forest staff and narrated his safari experience. He also praised the Forest Department for protecting the forest and wildlife. Range Forest Officer (RFO) Naveen Kumar was present.

The filmmaker later posed for selfies with his fans.