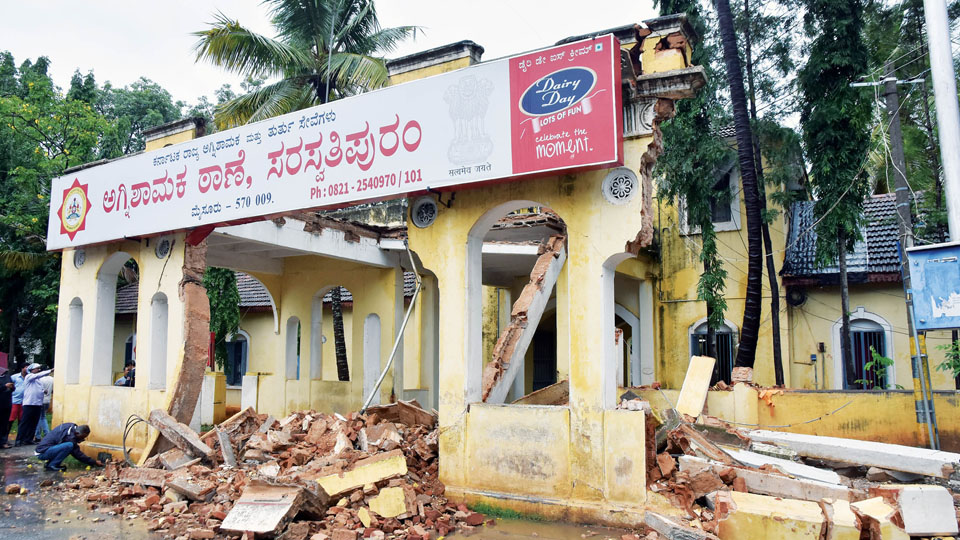 Fire Brigade office to be demolished

New building will be on Heritage lines

Mysuru:  The 121-year-old Fire Brigade Station, a heritage building, in Saraswathipuram that has partially collapsed is all set to be demolished and will be fully built on the heritage lines.

A clearance from the Mysuru Deputy Commissioner Abhiram G. Sankar, who is also the Chairman of the District Heritage Committee, is awaited and the DC is expected to seek the opinion from the Heritage Experts.

M.N. Reddi, the Director General of Police (Fire and Emergency Services) has written to Chief Fire Officer, Mysuru to reconstruct the building in consultation with the District Administration and the Heritage Committee. The front portion (portico) of the structure that was built in 1898 collapsed on Aug. 9 and almost 15 days later, the debris were cleared.

After the portico collapsed, a meeting of Public Works Department, Heritage Department and the Fire Department was held in Bengaluru under the chairmanship of Reddi and it was decided to demolish the building and reconstruct the same on heritage lines. The decision was taken as the structure was not fit for occupancy and unsafe for human life. The strength of the building has reduced over the years due to wear and tear, the meeting observed.

Following the meeting, Reddi’s Office wrote to Younus Ali Kauser, the Chief Fire Officer of Mysuru. As per plans, the entire building will be demolished.  The 19,059.08 Square Metre building campus has the offices of fire officers and over 50 official quarters accommodating 70 staffers.

The Chief Fire Officer has already written to the Deputy Commissioner and the Heritage Committee seeking their clearance. The properties are registered with the Director General of Police (Fire and Emergency Services).

Speaking to Star of Mysore this morning, Heritage Commissioner T. Venkatesh confirmed that a request letter seeking permission to demolish the Saraswathipuram Fire Brigade has come from the Fire Department. “We will examine the proposal in consultation with the heritage experts and take a decision,” he said.

Fire Department sources said that once the clearance is obtained from the authorities, the PWD or the Police House Building Society will be handed over the responsibility of the constriction. The front portion of the Fire Brigade has the offices of Station House Officer, store room and the offices of District Fire officer, Regional Fire Officer and Chief Fire Officer.

At the back side of the Fire Brigade Office, there is a parade ground, storage area, a temple and the official quarters. The place that is now used as vehicle parking area will be used to house the temporary offices when the building will be demolished, sources said. After the portion of the building collapsed, the offices of Chief Fire officer was shifted to Hebbal and the office of Regional Fire Officer was shifted to Bannimantap.