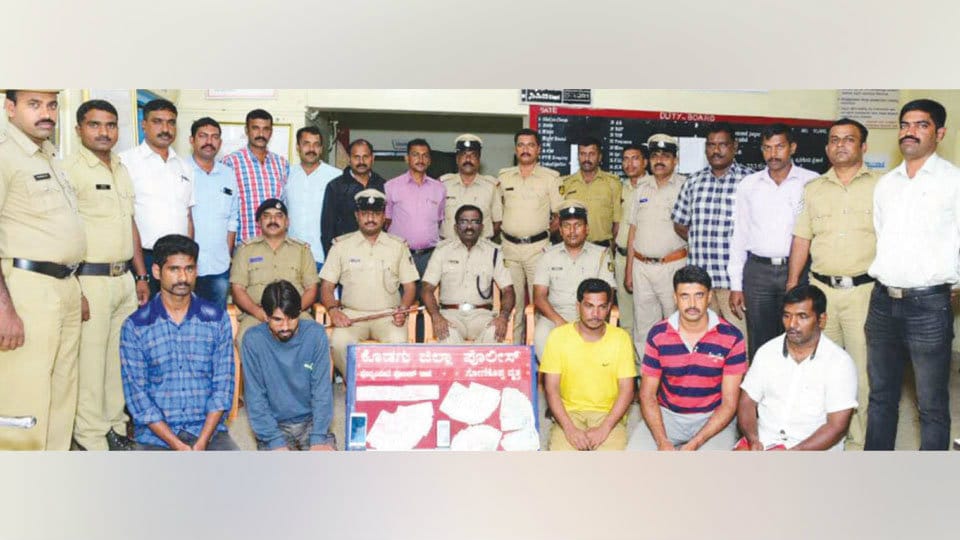 Ponnampet (Kodagu District): A gang that used to extort money by honey-trapping gullible businessmen has been arrested in Kodagu district. Then five-member gang used to target businessmen and the Police have seized Rs. 96 lakh cash from them.

In this case, a resident of Kerala was honey-trapped by the accused who hailed from Kodagu, Dakshina Kannada, Mysuru and Kerala. The arrests were made in a joint operation by Ponnampet and Gonikoppal Police. Four other accused including the kingpin Haris from Calicut, Ruksana and two girls from Mangaluru are absconding.

The arrested have been identified as 32-year-old Jamaluddin from Bantwal in Dakshina Kannada who is a sand businessman in Periyapatna, 35-year-old B.S. Mohammad, a car driver from Bilageri village, 28-year-old J. Sebastian, a broker from Suntikoppa, 47-year-old K. Fazal from Pallikal village in Puttur, Dakshina Kannada and K.P. Raheem, a daily wage worker from Cheruvallur village, Calicut in Kerala.

Thirty-six-year-old Aboobakar Munavar from Manandavadi, Wayanad district, Kerala and the owner of Metallic Glass and Plywoods, was interested in dating girls from Kodagu. His friends Haris and Rahim of Calicut invited him to Ponnampet. Aboobakar went there on June 23 and the two accused convinced him to go Periyapatna to meet the girls. They settled the deal and an unsuspecting Aboobakar went with them.

Aboobakar was then taken to a house at Harave Mallarajapatna near Periyapatna where he was sent to a room with two girls. The accused then locked the door from outside. After sometime, two other accused, dressed in Police uniforms, barged into the room and threatened to book a case of immoral trafficking and prostitution. They threatened Aboobakar that he would be taken to the Police Station for further interrogation.

As Aboobakar saw the men in uniform, he believed them and agreed to pay cash so that cases are not booked. The accused took Rs. 1 lakh cash, ATM cards and also got a cheque leaf  signed by him. They demanded he bring Rs. 2 lakh more.

With the arrest, the Police have recovered Rs. 96,000 in cash, 9 cellphones, a Maruti 800 car and ATM cards. Police are now hunting for Haris of Kozhikode, Ruksana, Ayesha and Rona from Mangaluru.

Investigations have revealed that the same accused had looted businessmen Ibrahim and Sadiq of Kerala, residents of Hoskote village in Kodagu, by honey-trapping them with the help of Salim and Karim at a house in Periyapatna.

They had threatened Ibrahim and Sadiq and had looted Rs. 5 lakh from them.

The accused had also threatened Mustafa, one more businessman from Kerala, through honey-trapping and had extorted Rs. 2.5 lakh. Commending  the Police for arresting the accused, Kodagu Superintendent of Police Rajendra Prasad has announced a cash reward of Rs. 10,000 for the Policemen involved in the operation.