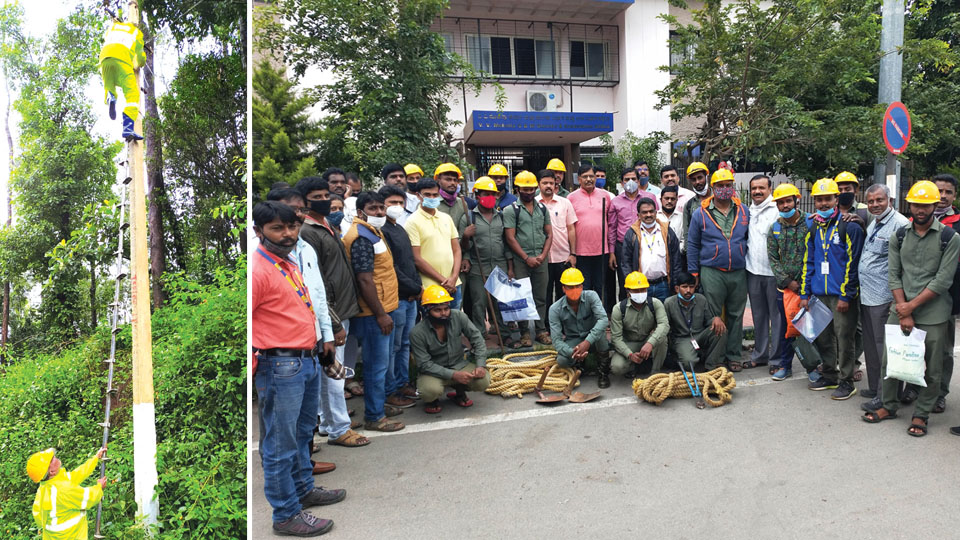 Mysore/Mysuru: Electricity infrastructure in several part of Kodagu has broken down completely and Chamundeshwari Electricity Supply Corporation (CESC) is standing in solidarity with the beleaguered district as it recovers from the ravages of heavy rains, floods and landslips.

Gusty winds have brought down many electricity poles, resulting in the snapping of electricity cables. CESC, entrusted with the responsibility of power distribution in the Old Mysore Region, is extending a helping hand to Kodagu in these testing times. The Corporation has specially deputed over 75 of its personnel, both skilled and unskilled to Kodagu to help restore power.

The personnel have been drawn from Hassan, Mandya and Mysuru. The team led by Executive Engineer Yogesh and Assistant Executive Engineer R. Rudresh have left to Kodagu on Monday and have been actively involved in restoring the snapped power lines, transformers and fallen electric poles.

First, the CESC personnel took up the restoration work in the areas where the floods have receded. They eventually worked on other locations. In the areas where earth movers can negotiate the roads, power supply has been restored fast after replacing the damaged poles. There are several inaccessible areas where linemen have to travel by foot and dig the ground to replace fallen poles. This manual work is taking time, officials added.

CESC has provided its personnel in Kodagu with various protective equipment like face masks, sanitisers, rain coats, boots, helmets, ropes and digging and levelling tools. Also, one truck has been sent to carry poles from one place to another. The team that left Mysuru on Monday  (Aug. 10) will perform duties till 10 days after which another team will proceed to the flood-ravaged district, officers added.

Accommodation facilities have been provided to CESC personnel at schools where there are good toilets and drinking water facilities. Food for them is being provided by villagers in remote areas. Also, each lineman has been given Rs. 5,000 cash for his food needs, officers said.