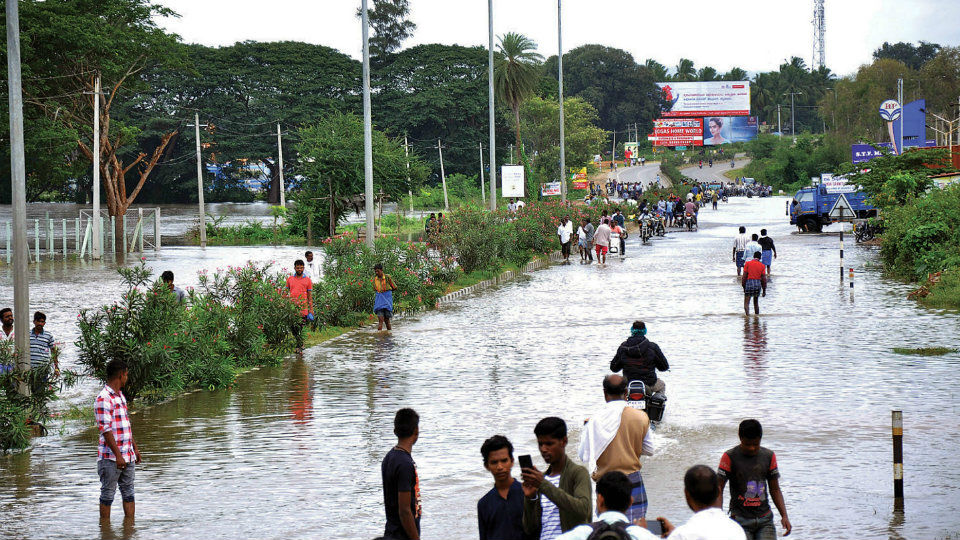 Mysuru/Nanjangud:  For the second time after its inauguration in 1974, a volume of 71,100 cusecs of water was released from the Kabini Dam yesterday and the water release was stepped up to 75,000 cusecs and then to 80,000 cusecs by evening. This resulted in ‘flash flood’, blocking the Mysuru-Nanjangud National Highway (NH) 212 (now NH 766) this morning.

The revival of southwest monsoon since the last three days, after a brief lull has led to heavy rain in Wayanad district of Kerala which has augmented the inflow and outflow from Kabini Dam in H.D. Kote district.

Likewise, the Krishna Raja Sagar (KRS) Dam is receiving good inflow from its catchment area in Kodagu and over 70,000 cusecs of water is being released from the KRS. 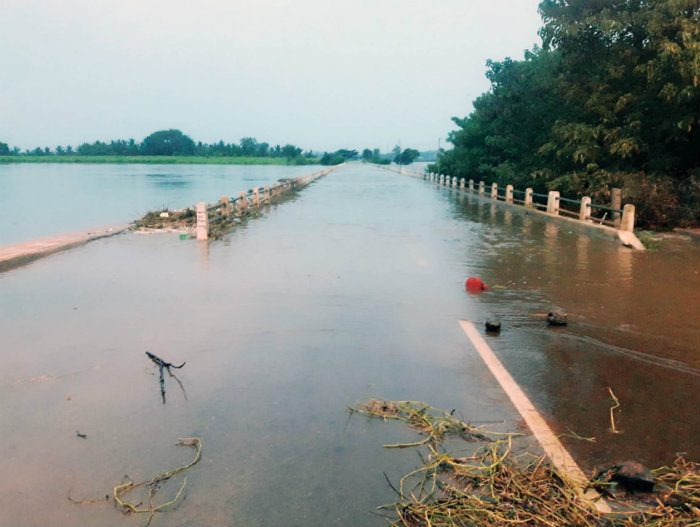 The water release from the Kabini Dam resulted in the overflowing of Kapila River for the third time during this monsoon. While the release of 55,000 cusecs of water from Kabini Dam caused extensive damage last month, yesterday’s release of 80,000 cusecs yesterday has caused the NH 766 to be blocked.

As the NH 766 connects to Tamil Nadu and Kerala, the travellers have been inconvenienced with the traffic being diverted. The road between Mallanamoole Mutt and the South India Paper Mill has been blocked and there is over three to four feet of water on the road. The bridge across Kapila near Suttur village too is submerged cutting off the link between Mysuru-Hosakote and Suttur.

Traffic from Mysuru side to Nanjangud has been diverted to Adakanahalli Industrial Area, Tandavapura, and Kempesiddanahundi to reach Nanjangud while vehicles coming from Gundlupet are diverted towards Hullahalli Circle to reach Mysuru. As the road is critical for the vehicles to reach Kerala and Tamil Nadu, huge traffic jams were witnessed in several places.

Following the block in the National Highway, Mysuru Deputy Commissioner Abhiram G. Sankar, Superintendent of Police Amit Singh, Tahsildar Dayananda and other officials rushed to spot after water level breached. Officials told Star of Mysore that the National Disaster Relief Force (NDRF) has been informed about the impending disaster. The NDRF is likely to send a team as more water will be released from Kabini as rainfall is continuing unabated in Kerala. 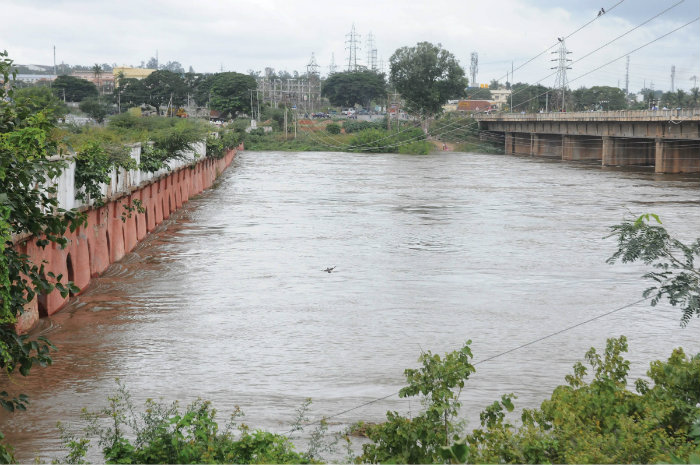 Two low-lying localities in Nanjangud have been partially submerged and efforts are on to relocate four families from there. A ‘Ganji Kendra’ (relief centre) has been opened at the Dasoha Bhavan at Srikanteshwara Swamy Temple in Nanjangud and over seven to eight families have been given temporary shelters.

Hundreds of acres of paddy have been destroyed. After the water release from Kabini last month, farmers had tilled their lands and had sowed paddy and even transplanted them into fields. They were hoping for a good crop as their fields had enough water. But all their hopes are dashed now as water has submerged their paddy crop. If the water level stays for a 24-hour period, the paddy crop will turn black, leaving it useless.

Revenue authorities have issued a warning to residents against venturing near the river.