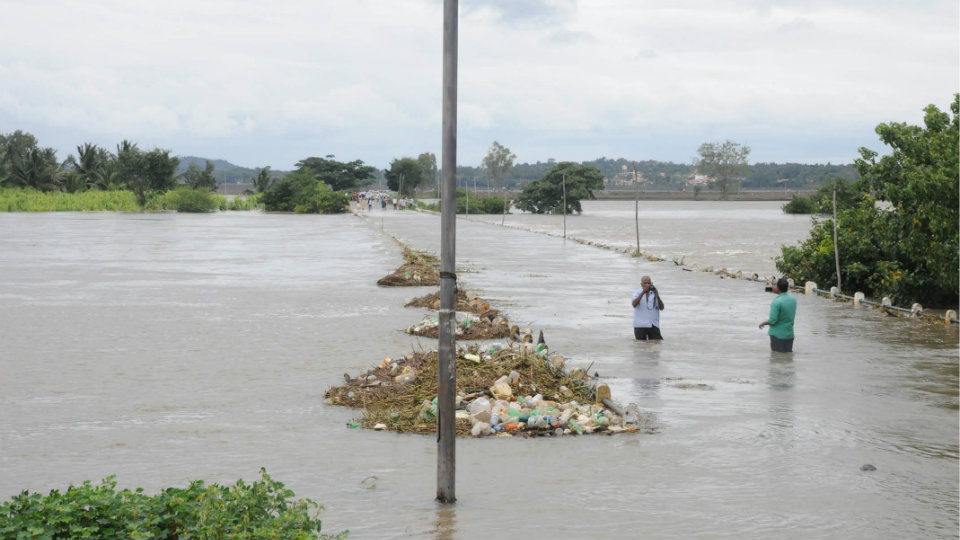 Nanjangud: – The temple town of Nanjangud, also known as ‘Dakshina Kashi’ continued to reel under floods for the second day today. The famous Srikanteshwara temple appeared like an island with flood water rising to almost 3 feet deep all around the temple, with most of the cluster temples in the vicinity too submerged.

The Nanjangud-Hejjige Bridge which provides a vital transportation link to the temple town has developed cracks reportedly due to the high pressure of gushing waters, following which the authorities banned movement of Heavy Traffic Vehicles while allowing only Light Motor Vehicles to travel on the bridge.

The bridge was inaugurated by the then Chief Minister Siddharamaiah only five months ago and the people have blamed poor quality of work for the bridge developing cracks in such a short span of time.

The rapid increase in the outflow from the dams of the overflowing Kabini and Kapila Rivers, has resulted in the flood waters inundating thousands of acres of agricultural land, destroying standing crops, thus causing grave concern for the farming community.

Most of the low-lying areas in Nanjangud town continue to remain partially inundated even as there is no immediate signs of water level in the Kabini and Kapila dams receding.

With the Mysuru-Nanjangud National Highway (NH 766) fully submerged near the Mallanamoole Mutt with water flowing more than 3ft deep on the stretch of the road, the authorities closed the road for vehicular movement for the second day today. 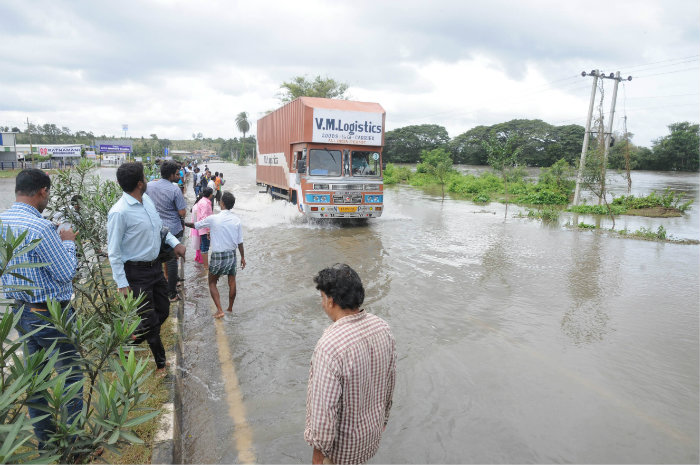 Sources said that the closure may continue tomorrow also as there is no indication of water levels receding in the next 24 hours. With the ever busy Mysuru-Nanjangud road closed for traffic, the Police have made alternative arrangement for traffic to ply via Tandavapura, Kempesiddanahundi and Basavanapura to reach the temple town.

With rising water levels, the Police have warned the public and devotees not to venture into the waters at any point along the banks of Kapila and Kabini rivers.