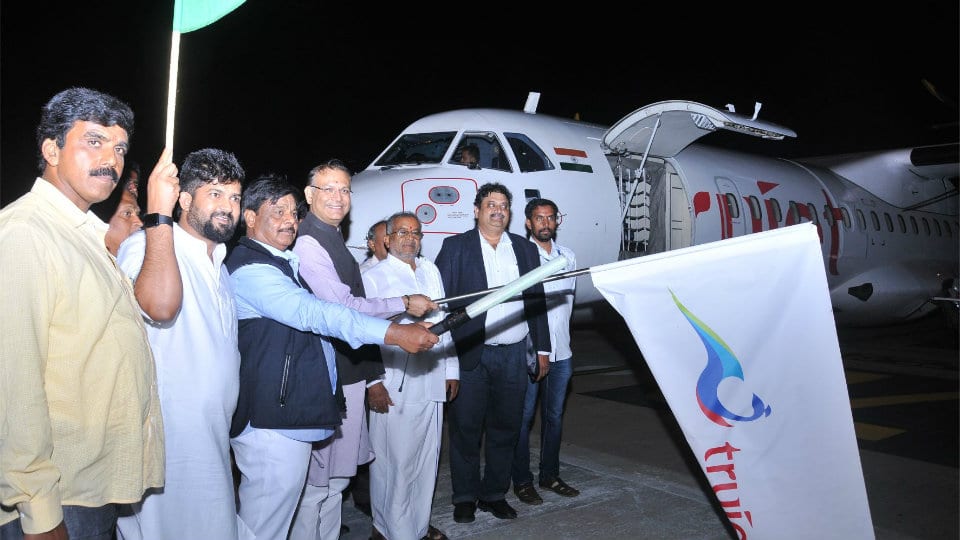 Mysuru: The much-awaited flights from Mysuru under the Central Government’s UDAN scheme resumed operations from the Mysore Airport last evening with Union Minister of State for Civil Aviation Jayant Sinha flagging of the Mysuru-Chennai TruJet flight.

Later, speaking Sinha said that the flights, which were grounded for some reasons, have once again started the flight operations. MP Pratap Simha and a few other Ministers in the State Government are responsible for this initiative. TruJet Managing Director Umesh has also cooperated to start the operations and in the coming days, more flights will be introduced.

In the second stage of UDAN scheme, along with Mysuru-Chennai sector it would connect Kochi in Kerala too. Also, there is a demand for helitaxi service between Kempegowda International Airport and Electronic City in Bengaluru and it will be introduced shortly, he said and added for the country’s progress under ‘Sab Ka Saath Sab Ka Vikas’ mantra, several schemes are being implemented with the cooperation of the people.

The runway has to be expanded at the Mysore Airport and if this happens then more flights can be introduced to Delhi and Lucknow and even it is possible to connect to Dubai. If the land is made available then along with the expansion of runway, including underpass, several development works and basic facilities can be provided. Every citizen in the country should be able to fly and this is the dream of Prime Minister Narendra Modi, said Sinha. MP Pratap Simha said that before the Dasara commenced, the flight services had begin from Mysore Airport with the arrival of the flight from Chennai. The Airport, which was closed for nearly two years has once again opened due to the cooperation of Jayant Sinha. Also, due to the stress of PM Modi on tourism, the tier-2 cities are gaining importance, he added.

Lauding Dr. Mahadevappa’s efforts, he said that only during election period, he (Mahadevappa) played politics but other times he was completely focused on development. To upgrade the Mandakalli (as it is popularly called) Airport, underpass is very essential. Hence, the State Government has to come forward to acquire the land and hand it over to the Centre, he requested Dr. Mahadevappa.

MLA G.T. Devegowda said the tourism industry and the tourists are going to benefit enormously due to the resumption of flights from Mysore Airport. The Central and the State Governments have to extend financial support for the continuous flight operations, added the MLA.