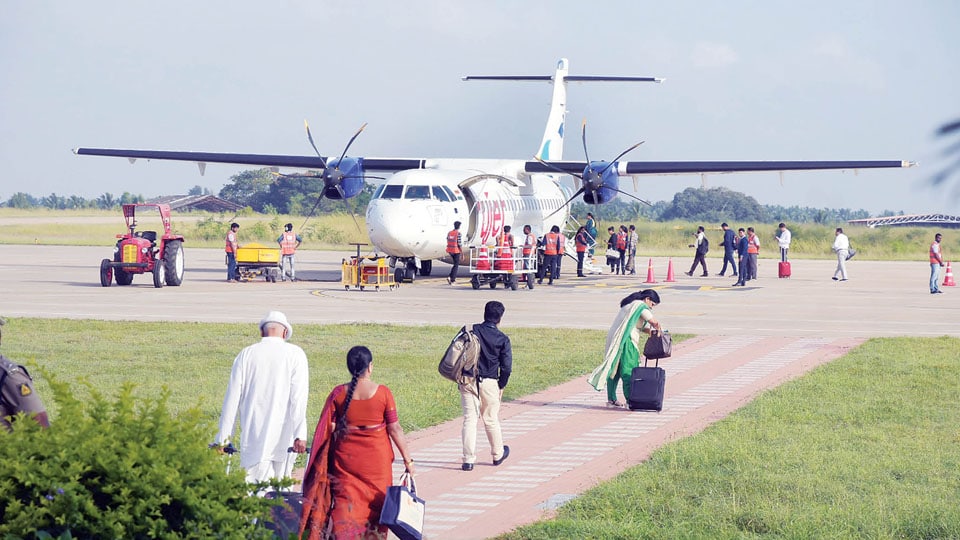 Flights to and from Mysuru record only 20 percent occupancy

Mysore/Mysuru: Just as all other service and activities are devastated by the COVID-19 induced lockdown, airlines operating flight services to and from the city too have been badly affected by poor occupancy rates, as almost all flights arriving and departing from the city are witnessing an occupancy of just 20 percent on an average.

As at present, flights are operated to and from Mysore Airport in Mandakalli to six destinations — Bengaluru, Belagavi, Kochi, Goa, Hyderabad and Chennai.

Mysore Airport Director R. Manjunath told Star of Mysore this morning that Mysore Airport records 12 aircraft movements on Saturdays and Sundays and 10 flights on all other week days to the six destinations, including Kochi, to which destination, flights from Mysuru have resumed now after the Cochin International Airport was partially shut for four months due to repairs in November last.

Pointing out that almost all aircrafts flying in and out of the city are 74-seater aircrafts, he said that following resumption of air service, after easing of lockdown curbs, all flights are witnessing occupancy of just 20 percent, a severe drop when compared to the pre-lockdown days, which has worried the airline operators.

Prior to the lockdown, the occupancy rate stood at 60 percent on an average and the operators too were satisfied with it.

But the lockdown has badly affected air passenger movement to almost all destinations, Manjunath said and expressed hope that the number of air passengers may swell in the coming days, as things start returning to normalcy.