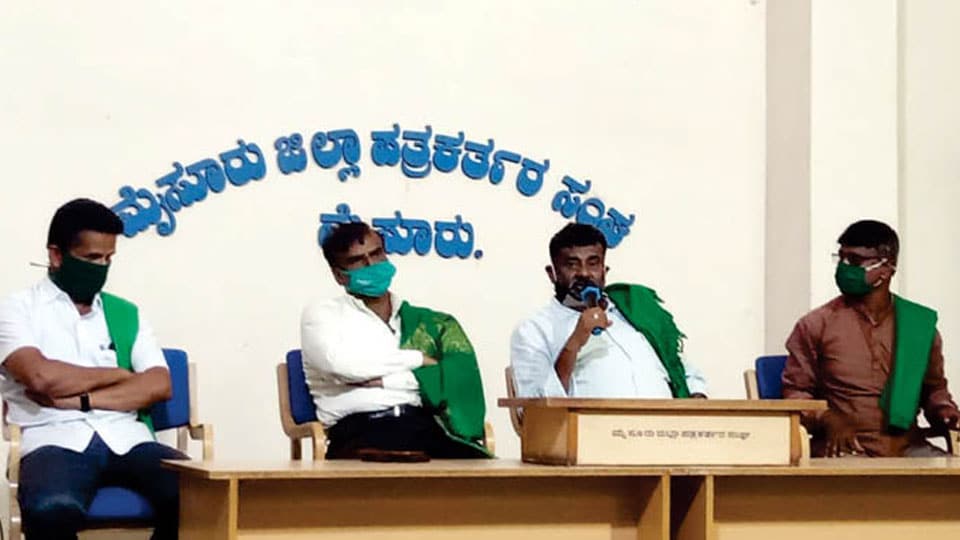 KRRS to lay siege to Vidhana Soudha on July 21

Rally at Kallahalli in Hunsur tomorrow

Announcing this at a press meet at Patrakarthara Bhavan here this morning, KRRS President Badagalapura Nagendra said that the KRRS has chosen Farmer Martyr’s Day (July 21) to register its protest against the Government’s amendment to the Land Reforms Act, which is very much against the interests of the farming community.

Urging the Government to immediately repeal the amendment, he said that farmers will also stage protests against Ministers and Legislators who are silent on the issue.

Continuing, Nagendra said that farmers will hold a massive protest at Ursu Kallahalli in Hunsur Taluk, the birthplace of former Chief Minister late D. Devaraj Urs, who was the Architect of Karnataka Land Reforms Act, at 10 am tomorrow (July 3). Prior to the protest, a procession will be taken out in the village and a demonstration will be staged in front of the Gram Panchayat Office there.

Nagendra further said that a massive procession will be taken out in Mandya on July 6 to demand the Government for repealing the amendments and also against other anti-farmer policies of the Government.

KRRS will hold a Kalaburagi Division farmers meet at Raichur on July 10 which will be followed by State-level Executive Committee meet of KRRS at Hospet in Ballari on July 11.

Pointing out that the farming community is in deep distress due to COVID-19 lockdown, loss of crops due to vagaries of nature, lack of markets and unremunerative prices for crops, he wanted the Government to defer repayment of farm loans and interest waiver in full.

KRRS office-bearers Hoskote Basavaraj, P. Marankaiah and others were present at the press conference.