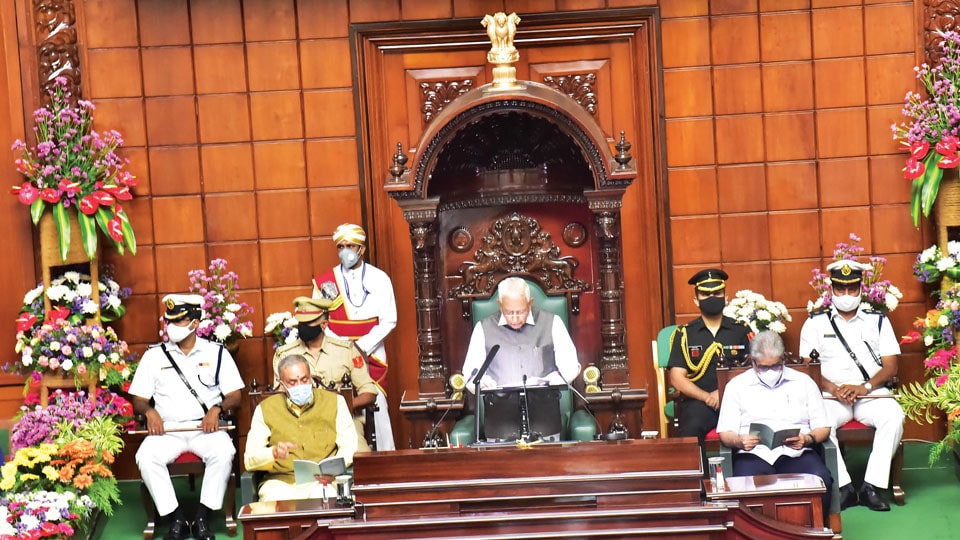 Bengaluru: The seven-day session of the Karnataka Legislature began at Vidhana Soudha in the State capital this morning, with Governor Vajubhai R. Vala addressing the Joint Session of both the Houses.

Vala, who began his speech amidst protests by Opposition Congress members, who took on the Government over various issues, said that Karnataka stands second in the country for milk production. Lauding the State for curbing the deadly COVID-19 pandemic, he highlighted the role of doctors, nursing staff and all other Corona warriors involved in the battle against the contagion.

Highlighting Karnataka’s Industrial Policy for the next five years, Vala said that the State is expected to achieve Rs.5 lakh crore investments and creation of 20 lakh jobs during this period. He further said that the Government has released Rs. 5,372 crore to more than 63 lakh beneficiaries from the working class such as labourers, auto drivers, weavers, washermen and barbers, during the COVID-19 crisis.

He also underlined a host of Government initiatives in key sectors like healthcare, infrastructure, irrigation, housing  and agriculture.

The Houses made obituary references to departed members M.C. Managuli, S.L. Dharmegowda and other dignitaries and personalities.

The Legislative Council on the first day saw Congress members taking on the Government over a host of issues, including the non-conduct of  the session at Belagavi for the past 18 months, the atrocious statements of Maharashtra Chief Minister regarding border row, inadequate funds for projects and inappropriate compensation to farmers who lost crops, cattle and houses due to natural calamities.

The Opposition Congress is all set to corner the Government on many issues which included illegal quarrying, inadequate release of money to farmers hit by last year’s floods, shortfall in the release of funds to Legislators’ Constituencies for undertaking development works and BBMP elections, among others.

Meanwhile, BJP member M.K. Pranesh filed his nomination papers for the Office of Deputy Chairman of Legislative Council, which had fallen vacant following the demise of S.L. Dharmegowda of the JD(S) in December last. Pranesh has the backing of JD(S), after the two parties firmed up their alliance to take control of the Upper House. The BJP will support senior JD(S) member Basavaraj Horatti in becoming the Chairman, with both the parties moving a no-confidence motion against the incumbent Chairman Pratapchandra Shetty of the Congress.

Taking on the BJP-JD(S) understanding, K.C. Kondaiah of the Congress too filed his nomination paper for Deputy Chairman of Legislative Council. He submitted his papers to Council Secretary Mahalakshmi in the presence of senior Congress leaders S.R. Patil, Narayanaswamy and B.K. Hariprasad.  The election, if found necessary, is likely to take place tomorrow.

The  week-long session is scheduled to end on Feb.5.