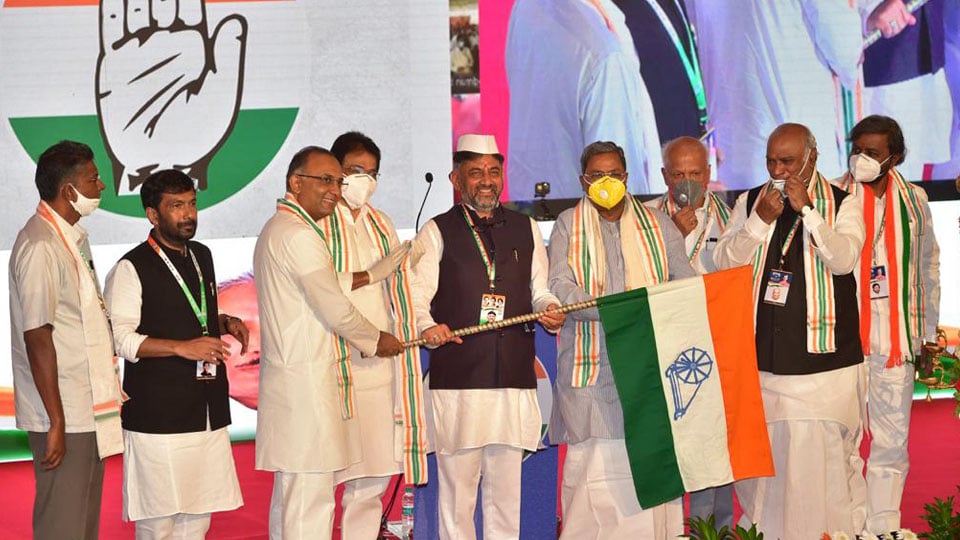 His dream of taking oath in the presence of lakhs of cheering party workers at a mammoth public function was shattered by the Coronavirus pandemic. However, not losing heart, Shivakumar decided to take charge at “Prathigna Dina” (oath-taking ceremony), a one of its kind, mega virtual public meeting.

The main function was organised at KPCC office on Queens Road in Bengaluru and was relayed live across the State including Mysuru where the programme was organised at Congress Office near City Railway Station. Over 300 Congress Block Presidents were invited for the live telecast event.

Two giant screens were set up at the Congress Office. While one screen beamed the telecast from Bengaluru, the other screen had a live interaction where Congress party workers and leaders conveyed their wishes to the new State Congress President and also reported the local activities on the “Prathigna Dina”.

Apart from the Congress Office, all 65 Wards of Mysuru City Corporation (MCC) had one venue each for the live telecast where arrangements were made in the local community halls. As Shivakumar took oath, the local leaders and workers too took oath, supporting their leader. During the ceremony, Congress Vice President Rahul Gandhi telephoned Shivakumar and congratulated him. Former Minister Atmananda, former MLA Vasu, former MP Kagalwadi Shivanna, Dist. Congress President Dr. B.J. Vijay Kumar, City President R. Murthy and others were present.

Party sources said that over 7,200 giant television screens were set up across Karnataka and each Assembly seat had an average of 30 screens spread across the constituency. The programme was also streamed live on television news channels and social media platforms.

ONE COMMENT ON THIS POST To “D.K. Shivakumar takes oath as KPCC Chief in a live-cum-virtual event”