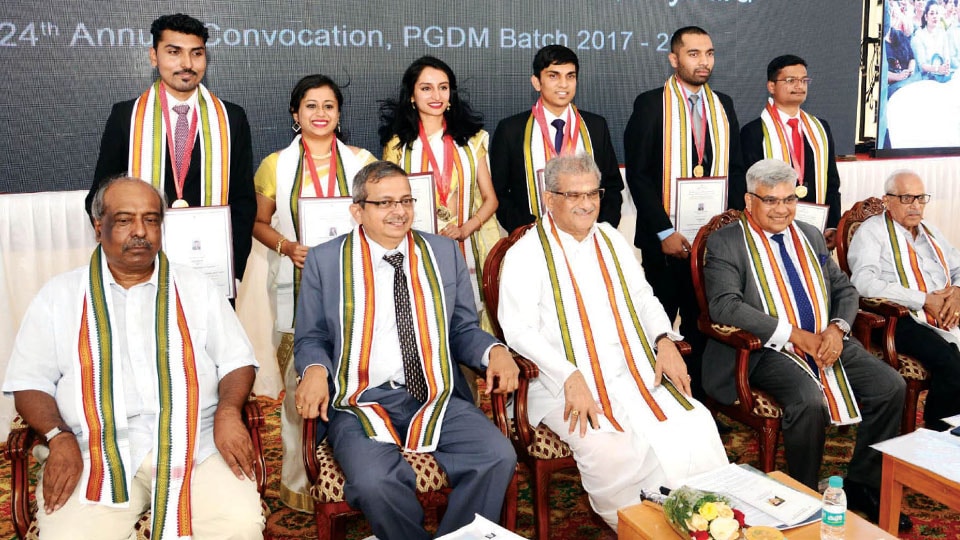 Focus on improving skills among workforce: President of Volvo Group

Degrees conferred on 140 students of SDM-IMD

Mysuru:  “India’s employment generation will be based on skilled labour by 2022, therefore the enhancement of skills among the existing labour force is a must for the growth of economy and development of the nation,” said  Managing Director of Volvo Group Kamal Bali.

Delivering his speech at the 24th Convocation Ceremony of Shri Dharmasthala Manjunatheshwara Institute for Management Development (SDM-IMD) located on the foot of Chamundi Hill yesterday, he wanted the skills of the workforce be updated and sharpened for job creation and sustainable development of the country.

The Gross Domestic Product (GDP) which is 7.3 now had collapsed to 7 during of higher currency notes and after GST was introduced in the nation,  he said.

Highlighting that the country is witnessing a lot of opportunities and tremendous development in many spheres due to technological and economic advancement, he said that India will see the development of 10,000 kilometres of high speed railway line by 2025, improvement of 400 airports, development of 1,000 kilometres metro railway line, 800 new expressways, 100 smart cities and upgradation of more than 600 railway Station with world class facilities in  coming years.

About 41 per cent of people in India are 18. It is obvious that they would be joining the workforce and forming an integral part of the economy. Generating jobs for the future generation is another challenge before the government. Unemployment hampers the economic growth of a country. Due to the lack of skill and confidence, people settle for jobs that pays them way less, he said.

It brings in a negative environment in industries and create a disputed relationship between the employer and the employee, he added.

He further said that this practice further gives rise to activities like gambling, robbery etc.  and hampers the social environment of a country, he said and added that despite having a large population, the human resources are not efficient.

Speaking after handing over the certificates to the graduating students, Chairman of SDM-IMD Dr.D. Veerendra Heggade said that in the last two decades, India has made progress and contributions especially in space technology. “India is accepted internationally for its goods and services. Several Indian brands are recognised globally. Around the world, professionals from India are the most sought after and respected. But, there is still a lot to be done to improve in the areas of poverty eradication, gender discrimination, illiteracy and terrorism,” he said.

“With the huge challenge of economic upliftment of the poor, we need better infrastructure, a good law enforcement system, better education safety for women, business-friendly policies,” he said.

“Our education system should instil good values among young people and shape them into wonderful human beings. Our curriculum should equip the students with the skills necessary to transform them into confident and capable individuals, who will be great managers. Such committed youngsters would ensure a safer and better India. They will be the leaders of tomorrow, who will be intelligent,” Dr. Veerendra Heggade said.

Degrees were conferred to 140 students including Vijayapura based specially-abled student Akshay Mahajan.