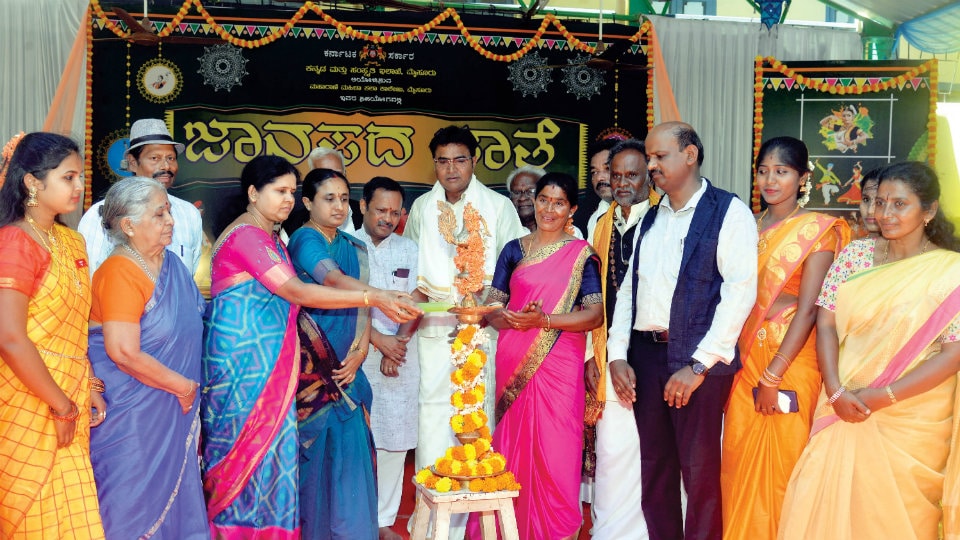 Mysore/Mysuru: Students of Maharani’s Arts College for Women, dressed in traditional folk attires and some in sarees, took out a procession marking Janapada Jaathre (Folk Festival), organised by the College in association with Kannada and Culture Department.

Zilla Panchayat President Parimala Shyam, who then inaugurated the formal event, speaking on the occasion, said, “Some folk artistes who never went to school or had any form of formal education have kept the folk art alive even to this day, which has been passed on to them from their ancestors, just through reciting them at different platforms and at their homes from time-to-time. Folk art is a language and a medium of communication too. In today’s fast paced world, these rich folk arts are losing their foothold. We have to preserve and protect these folk form before they are long gone,” said the ZP President.

READ ALSO  ‘Sanskrit is not a tough nut to crack’

Karnataka Sahitya Academy President B.V. Vasanth Kumar was felicitated on the occasion. Addressing the students and artistes, Vasanth Kumar said that the folk songs originated at individual homes in villages while grinding ragi, rice and other millets so that the woman grinding them didn’t feel tired during the process. Folk art should not be limited to stage events as such, it should be part of everyday life and people should find ways to inculcate them, he said.

Rajyotsava awardee Doddagavi Basappa and Mahesh Kumar were also felicitated on the occasion.