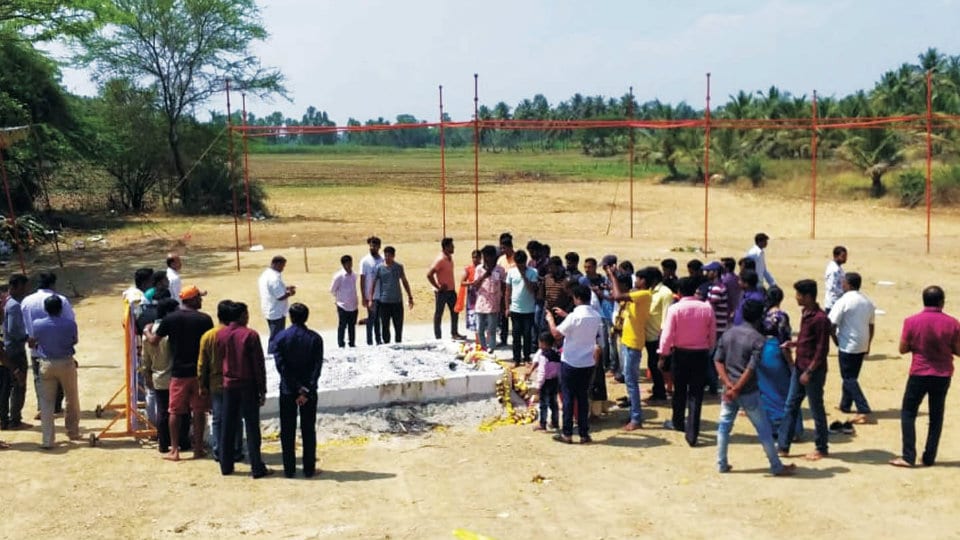 Mandya:  The killing of H. Guru, a CRPF sepoy, has brought a cloud of gloom over Gudigere in Mandya district. Villagers are still in a state of grief over the death of their valiant son.

Guru had joined the CRPF in 2011 after serving in Jharkhand as part of the 94th Battalion. He belonged to the 82nd Battalion of the CRPF and was posted in Srinagar. He had spent fifteen days at his home and is fondly remembered by his friends and family members. He was along with his fellow troopers from Jammu to Srinagar when the devastating attack took place in Pulwama district of Jammu and Kashmir.

Hundreds of people from nearby villages, members of various organisations, officials and political leaders thronged Mellahalli yesterday to pay homage to Guru at the place where he was cremated. Guru is the eldest son of Honnaiah and Chikkolamma and Mellahalli is about 1 km from his village Gudigere Colony.

As the public was not allowed to pay last respects to Guru on Saturday owing to the delayed arrival of the mortal remains, many people visited Mellahalli and performed puja at his cremation site yesterday. They also collected ashes from the place.

The bereaved family and villagers are still distraught as Guru’s death is yet to sink in. His mother Chikkolamma and hundreds of villagers and people from outside visited the cremation  ground. Guru’s mother was inconsolable remembering her son’s promise that he would return in April and spend time with her. “My son is no more and that is truth,” she said.

“I have sacrificed a son in Mother India’s service and I will send my other son H. Anand as well to fight. I am ready to give him up for Mother India, but Pakistan must be given a befitting reply,” she said. “We are proud of our son for sacrificing his life for the country. I am ready to send Anand (a Home Guard) to serve in the military. The Central Government should consider our request,” she said.

Guru’s wife Kalavathi too has urged the Government to give her an opportunity to serve the nation. “I want to serve the country in whichever capacity. My husband laid down his life for Mother India and seeing his supreme sacrifice, I am inspired,” Kalavathi told reporters yesterday.

Guru’s father Honnaiah said that his son is not dead. “My son is alive in all the hearts.   He has become immortal,” he said, with tears in his eyes. “It is very difficult to have a son like this. I am fortunate to have Guru as my son. What else a father desires,” he said.

Actors Rishab Shetty and Haripriya, along with team members of their Kannada film ‘Bell Bottom,’ visited Mellahalli and spoke to the bereaved family.

Congress leader Amaravathi Chandrashekar from Mandya handed over a cheque for Rs.1 lakh to Chikkolamma.