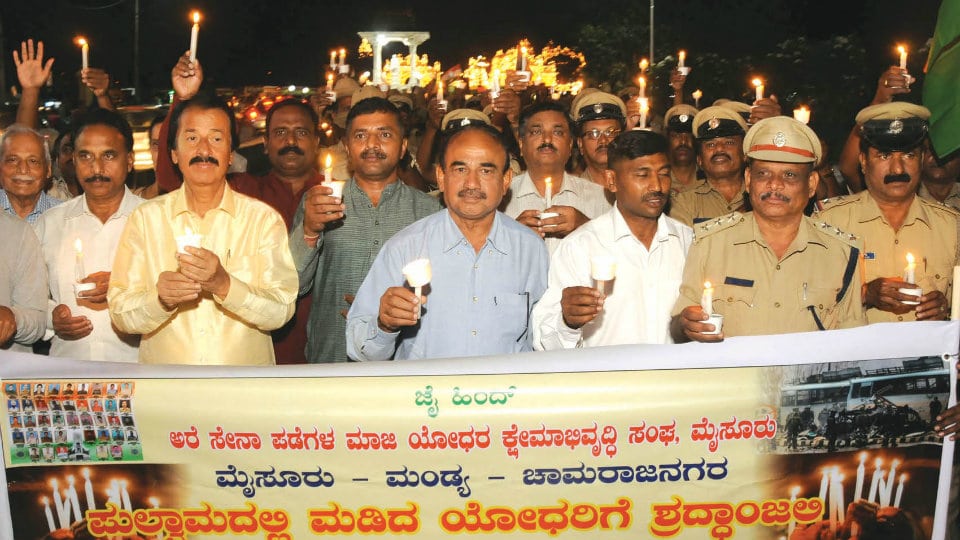 They paid tributes by holding candle light at Kote Anjaneyaswamy Temple at the north gate of the Mysore Palace here yesterday and condemned the heinous attack on the soldiers.

They formed a human chain at Gandhi Square and raised slogans in praise of the country and observed silence for the martyred soldiers. They also raised slogans for the Indian soldiers and assured them that they were standing by them.

Later, CRPF IGP (retd.) K. Arkesh speaking said that Pakistan is trying to spread disunity in the country as it is not able to accept the fact that India is developing in all areas. Hence, not able to face the country directly, it is trying to indulge in cowardly acts.

Former MLA Vasu said that  the Government should take care of the families of soldiers who have laid down their lives for the country and help in the education of their children. He would donate his one month’s pension to the family of martyr Guru from Mandya. Even though it is not a big contribution, it is a token amount for the family, he said.

Mayor Pushpalatha Jagannath said that the Mandya martyr Guru’s wife is a role model for everyone. The way she saluted the mortal remains of her husband not only moved everyone’s heart but also gave a ray of hope for every woman in distress.

Jatha: More than 800 students including the faculty and Principal of Vidyavardhaka First Grade College held a jatha in memory of the martyred soldiers, recently.

The jatha began from the College premises on Seshadri Iyer Road and passed through Sayyaji Rao Road, Ayurveda Hospital Circle, then wound its way through J.K. Grounds, Devaraja Urs Road and then formed a human chain on JLB Road.

The students then garlanded the statue of Field Marshal K.M. Cariappa at Metropole Circle. Later Principal Dr. S. Marigowda submitted a memorandum to the DC at the DC’s Office.