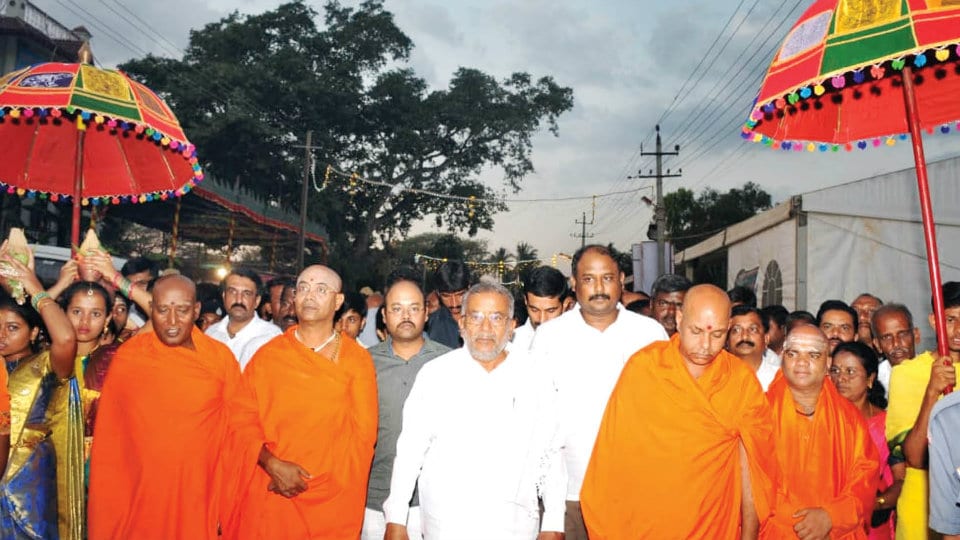 The 11th edition of Kumbha Mela is being held at T. Narasipur, which is where Cauvery, Kapila and Spatika rivers meet. It is expected to attract at least 10 lakh devotees from Mysuru, Mandya, Bengaluru as well as the neighbouring States of Tamil Nadu, Kerala and Andhra Pradesh.

T. Narsipur is considered one of the sacred pilgrim centres, which draws devotees from distant places, and the Kumbha Mela here is held once in three years to coincide with the events that take place by rotation at Prayagraj, Ujjain, Nashik, and Haridwar once in 12 years.

The event started with a special puja at Agasthyeshwara Swamy Temple yesterday morning and the Mela was formally inaugurated by District in-Charge Minister G.T. Devegowda later in the evening.

Speaking on the occasion, he said that the tradition and religious culture of the State should be protected for the future. A flowing river was equated to mother symbolising emotion, devotion and purity. The Triveni Sangam would be developed as tourist spot to devotees visit regularly, he added.

The District Administration and the Department of Kannada and Culture have planned a grand cultural procession on Monday from 4 pm onwards. Besides, cultural programmes will be held at the Cauvery, Kapila and Triveni Sangama Vedike set up for the purpose during mornings and evenings.

Over 120 Pourakarmikas have been deployed to keep the town clean in the wake of lakhs of devotees coming to have a holy dip at the Triveni Sangam.

They start their duties at five in the morning and are tasked with sweeping as well as collecting garbage strewn in the Kumbha Mela surroundings. They have to remove offerings like flowers and coconut shells left by the devotees.

They are sanitising the whole premises with disinfectants and clearing out garbage in the dustbins and the ones left over by devotees. They were also seen cleaning the stairs to the river where devotees were performing the sacred dip as well as clearing out the clothes left in the water by them.

They were also seen cleaning mobile chemical toilets set up on the premises. Over 120 Pourakarmikas have been deployed on a temporary basis for the three-day event and they will be working in batches of 40 across three shifts to ensure cleanliness. Apart from them, the areas will be monitored by permanent Pourakarmikas of the Municipality.

In order to check the usage of plastic at the event, volunteers of NSS and Yuva Brigade are being utilised to convince and sensitize the devotees against using them.

Food Safety Officers have been deployed to inspect the quality of meals being served at the Kumbha Mela. The organisers have made arrangements for serving meals to thousands of devotees expected to turn up over the three days. As part of the Dasoha programme, devotees will be served rice, sambar and a vegetable dish.

Apart from three Food Safety Officers, who will inspect all raw materials for the Food Safety and Standards Authority of India (FSSAI) mark before allowing them to be used in the preparation of food, Mysuru District Vector-borne Diseases Control Officer S. Chidambara and Mysuru District Surveillance Officer, Health and Family Welfare Department, Kusuma, have also been deputed to oversee the preparation and serving of meals.

Dr. Chidambara said that the raw materials come in packets. “We will not allow packets without FSSAI mark.” The quality of water and cleanliness of utensils used in cooking will be checked, he said. Cooks and personnel employed to serve meals will have to undergo medical check-up. “Our teams will check if they are suffering from any communicable disease. We will also check their personal hygiene. We will advise them to cover their hair and use gloves wherever necessary,” he said.

A sample of the food will first be tested for quality and consumed by the Food Inspectors before it is served to devotees.

The food will be served at JSS Bhavan, Adichunchanagiri Bhavan, and a tent put up for  Police personnel.

Gunjanarasimhaswamy Temple is a ‘Gunja’ more than Kashi

Thousands of people come to T. Narasipur to visit the ancient temple dedicated to Lord Narasimhaswamy. The Temple is popularly known as Gunjanarasimhaswamy Temple.

The legend of the idol is that a washerman (dhobi) had a dream in which Lord Narasimha asked him to remove his idol below an anthill and construct a temple for him. The washerman then asked the Lord where he will get the money to build a temple.

The Lord tells him to look under the washing stone for money and the washerman finds the money and constructs the sanctum sanctorum for the Temple. The Lord then asks the washerman a boon for having built the temple and he requests a visit to the holy Kashi in Varanasi.

To this, the Lord tells him that from now on the ‘Punya’ received to devotees who visit Gunjanarasimhaswamy Temple will be a ‘Gunja’ more than Kashi. The Lord also declared T. Narasipur as Dakshina Kashi.

At the Temple, Lord Narasimha’s idol is depicted holding a weighing balance with a twig of Gunja plant and hence the name Gunjanarasimhaswamy. This signifies the importance of T. Narasipur Vs the Kashi by a Gunja seed. ‘Gunja’ is known as ‘Gulaganji’ in Kannada.

The ‘hochalu’ (threshold of the door) is carved with images of the washerman and his wife as it was their wish to be touched by the devotees’ feet.