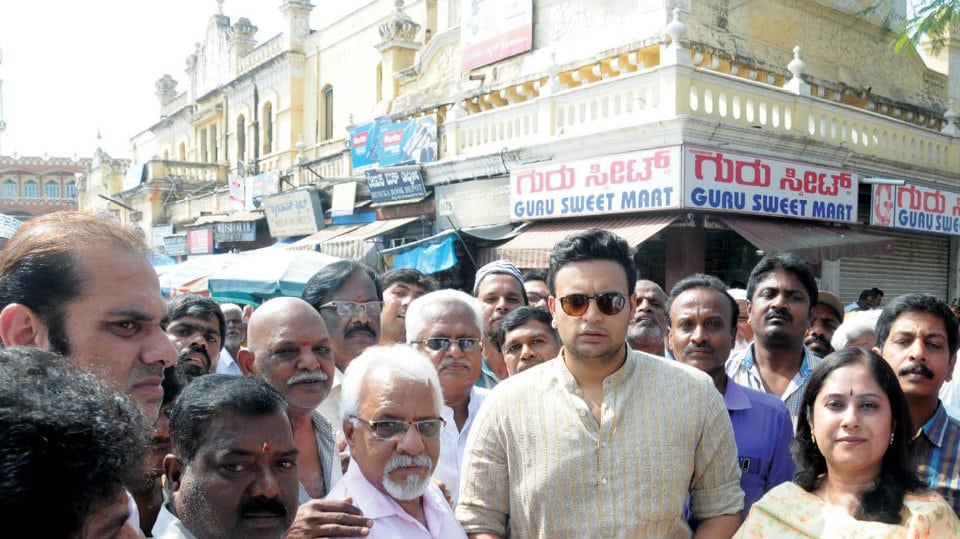 Mysuru:  Strongly objecting to the MCC’s decision to raze down Lansdowne and Devaraja Market buildings in the city, titular head of the Mysore Royal Family Yaduveer Krishnadatta Chamaraja Wadiyar has said that there will be no heritage buildings left in the city, if the authorities raze heritage structures one by one.

Speaking to press-persons after visiting Devaraja Market on Saturday, Yaduveer observed that there will be no meaning to the welcome arch set up by the MCC on Mysuru-Bengaluru Highway that reads ‘Samskrutika Nagari Mysoorige Swagatha,’ if the MCC demolishes the two iconic heritage structures in the heart of the city.

Maintaining that the MCC should immediately begin restorations works of the two structures, Yaduveer said that during his visit, many experts and traders told him that the Devaraj Market building was quite strong.

Stating that he came to know of the MCC’s decision to pull down the two structures, through media, he said that an Expert Committee on heritage structures has given suggestions on restoring the buildings without demolishing them.

Pointing out that Lansdowne and Devaraja Market buildings are emotionally bonded with the citizens of Mysuru, Yaduveer emphasised on the need for saving the two heritage structures by restoring them using the latest technology.

Continuing, Yaduveer said there were hundreds of heritage structures in Mysuru, Bengaluru and other districts and it was important that all these structures are conserved. Noting that several heritage buildings in Rajasthan’s capital city Jaipur, which were on the verge of collapse, have been restored using modern technology, he reiterated the need for saving the two iconic buildings of the city.