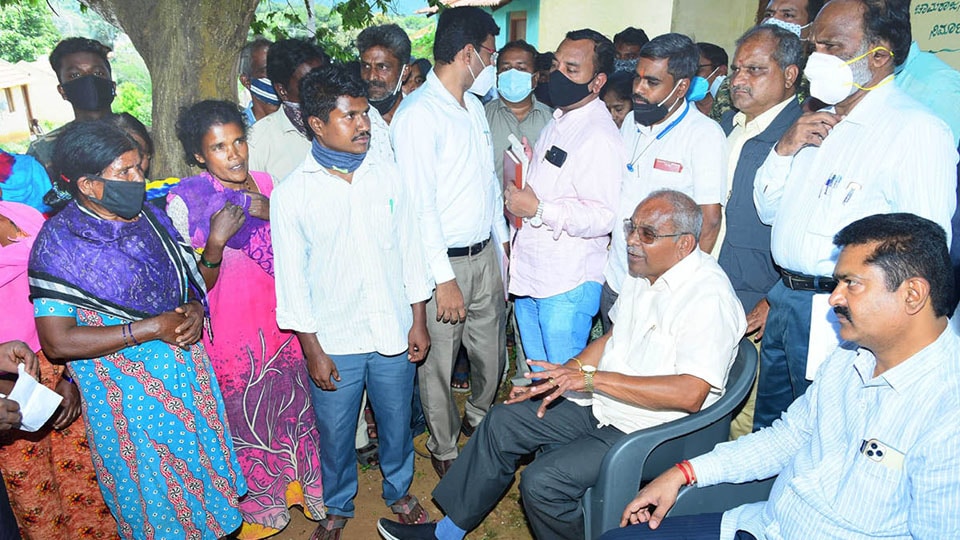 The Minister, who visited Melukamanahalli Tribal Colony, asked the residents whether they were receiving rations and the quantity of grains and other items being distributed to them.

A few tribals told the Minister that they were not receiving rations as their Aadhaar card number could not be linked and their KYC (Know Your Customer) not updated.

The Minister instructed the officials concerned to immediately look into the issue and take steps to link the Aadhaar card numbers besides asking the officials to make necessary arrangements nearby for those who do not have Aadhaar cards.

He also instructed the officials to immediately respond to any issues and make necessary arrangements for the tribals and villagers to get rations.

Instructing the officials concerned to provide power connections to houses built for the tribals by the Social Welfare Department, Minister Katti told them to construct toilets.

The Minister later visited Maguvinahalli and Haggadahalli Tribal Colony. He instructed the officials to see that every tribal family gets their ration quota and urged the tribals to take COVID vaccination. Katti later held a meeting with Food, Civil Supplies & Consumer Affairs Department officials at the Forest Department’s meeting hall at Bandipur.

No expansion of Highway at Bandipur

“Opportunity will not be given for the expansion of Highway and night traffic at Bandipur,” said Minister Umesh Katti.

Addressing media persons at Bandipur, the Minister said that the Forest Department had opposed the Highway expansion proposal  submitted by the National Highway Authority of India (NHAI) and has written a letter in this regard asking the officials not to give permission.

“I am an aspirant for the Chief Minister’s post. One cannot indulge in politics without expectations. I am no 60 and will be in active politics for 15 more years. Let us see,” he said.

Replying to a question on Ganesha Festival celebration, Katti said that he would abide with whatever decision Chief Minister Basavaraj Bommai takes.

The Minister, who arrived at Bandipur on Wednesday night, stayed overnight at the Guest House and went on a safari next morning. MLA C.S. Niranjan Kumar, Bandipur Project Tiger Director Natesha and ACF C.C. Patil accompanied the Minister.