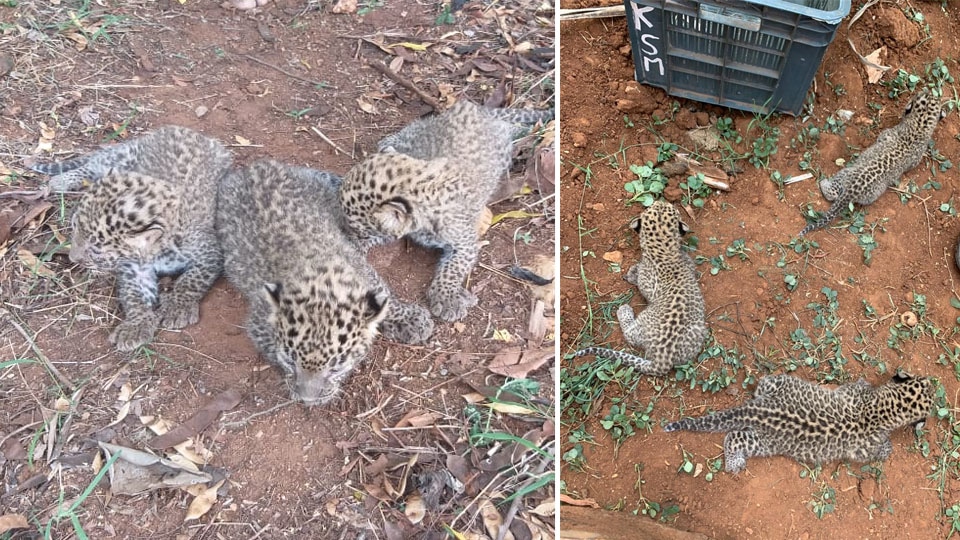 Mysore/Mysuru: The Forest Department personnel have reunited three leopard cubs with their mother, thus displaying their concern for wildlife conservation and protection.

The three leopard cubs, born about four to five days ago, were found in the sugarcane field of one Honnappa in Kodanahalli in the taluk on May 17. The villagers had put the cubs in a tray and had informed the Forest Department personnel. Range Forest Officer (RFO) M.K. Devaraju and Deputy Range Forest Officer (DRFO) Malegowda, who rescued the cubs, decided to leave the cubs at the spot as they were just a couple of days old and wait for the mother to take back the cubs. Though there are instances of Forest staff providing foster care to many cubs earlier, the Forest officials decided to reunite the cubs with their mother.

Following instructions from Chief Conservator of Forests (CCF) T. Heeralal, Deputy Conservators of Forests (DCFs) Alexander and Dr. K.C. Prashanth Kumar, the Forest staff began to keep a hawk eye vigil on the surroundings of the spot, where the cubs were found and found the mother leopard searching for its cubs.

The Forest staff immediately brought it to the notice of their higher officials, left the leopard cubs at the spot where they were found at about 6.30 pm and began to observe them by hiding at a distance.

Though it began to rain, the Forest staff kept their vigil over the leopard cubs.