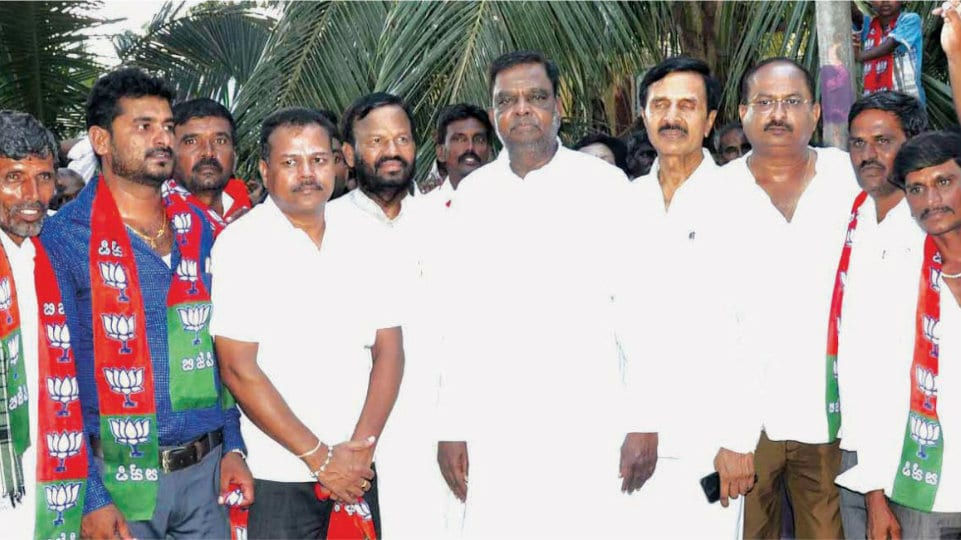 Nanjangud: Former Union Minister and State BJP Vice-President V. Sreenivasa Prasad predicted that in the Assembly elections on May 12, BJP is going to sweep to power and State BJP President B.S. Yeddyurappa will be the Chief Minister.

Prasad was speaking after going on a door-to-door campaign in Shankarapura, Sreerampura, Anandpura Layouts along with hundreds of party workers, canvassing for BJP Candidate Harshavardhan, his son-in-law.

He said that he had fought the by-election in Nanjangud with a lot of self respect but it got wiped away before the money power. However, the time has now come for the voters to destroy the arrogance, high handedness and money power of Chief Minister Siddharamaiah who has throttled Dalit leaders. He asked them not to be swayed by any enticements or money.

The KPCC President has been sidelined in this election. Please do not cast your vote for Harashavardhan as son-in-law of Sreenivasa Prasad but vote for him because of his qualities as a candidate, he said.

“I had not lobbied for the seat for my son-in-law. It was the High Command who found him as a suitable candidate and fielded him,” he said.

CM Siddharamaiah is contesting from two constituencies because of the fear of losing. However, he will lose in both of them. This time the people will teach Congress a proper lesson, he thundered.

Rousing welcome: Prasad was given a rousing reception when he visited the layouts, with women welcoming him with arati and youth bursting crackers. He was also offered a Mysuru Peta.