Home » News » Four killed, over 18 injured as bus falls into gorge near Ooty 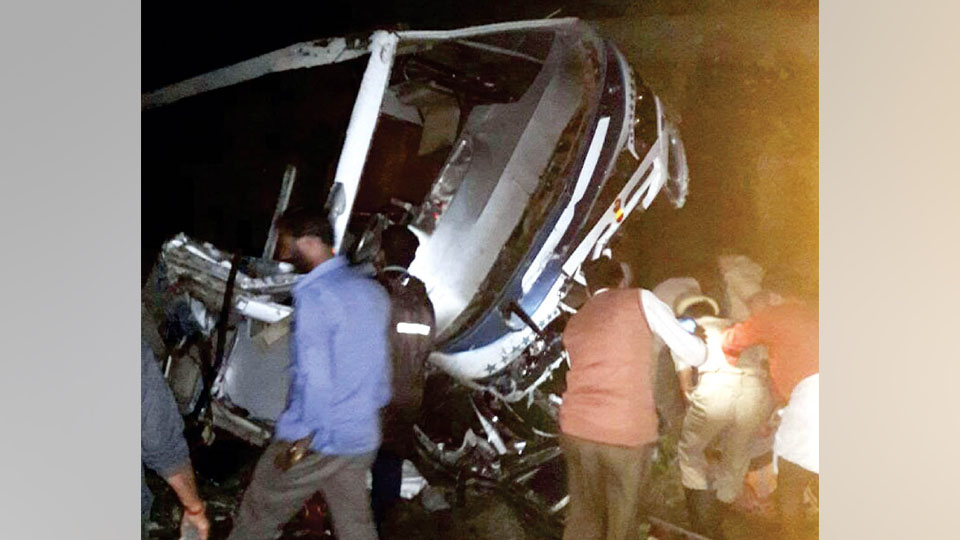 Four killed, over 18 injured as bus falls into gorge near Ooty

Mysuru:  Four persons including two women members of a Sthree Shakti Group from Bengaluru  and two male cooks, were killed and over 18 persons were injured when the private bus in which they had gone to Ooty fell into a 110 ft. deep gorge while returning last night.

The members of the Sthree Shakti Group had hired a 40-seater private bus (KA-01-C-5415) from Bengaluru for a two-day trip to Mysuru, Madikeri and Ooty. The Sthree Shakti members and four male cooks left Bengaluru at about 3 am yesterday and reached Ooty via Mysuru. After going for sightseeing in Ooty, they left Ooty at about 6.30 pm to Mysuru via Gudalur.

When they were proceeding between Nadubetta and Gudalur, the bus driver is said to have overtaken a tempo but failed to see a hairpin bend in the front resulting in the bus falling into the deep gorge killing four persons on the spot and leaving more than 18 persons injured.

Passersby, who saw the accident, stopped their vehicles and tried to rescue the people trapped inside the bus. Finally, Nadubetta Police managed to rescue the injured with the help of the public and shifted them to K.R. Hospital in Mysuru and other hospitals in ambulances and private vehicles.

While the two women who were killed are yet to be identified, the two male cooks are Ravikumar Nayaka (28), son of Raja Nayaka of Siddalli village in Doddaballapur taluk and Ganesh (19), son of Sampath and a resident of Rajarajeshwarinagar in Bengaluru. It is learnt that the Sthree Shakti members had taken the youths – Ravikumar, Manju, Ganesh and Ravi to cook food from them.

Following the accident, the road was blocked for about five hours and the Police had made the way by allowing vehicles from one side for a few minutes and later allowing the vehicles from the other side to pass the road in turns.

Ooty Additional SP Govi, Gudalur DSP Ravishankar, Nadubetta Head Constable Vincent and other officials visited the spot and helped in the rescue operation. The process of lifting the bus from the gorge with the help of cranes were on this morning.

Meanwhile, Manju and Ravi are undergoing treatment at K.R. Hospital here. While Manju is said to be out of danger, Ravi, who suffered injuries to his lungs is being treated at an ICU in K.R. Hospital.

About 18 women and two children, who were treated for injuries at K.R. Hospital yesterday night, left for Bengaluru in the wee hours of today.

Nadubetta Police, who have registered a case in this regard, are investigating.

Following the accident, Bandipur Tiger Reserve Director Ambadi Madhav, who received the information that 13 ambulances were carrying the injured to K.R. Hospital in Mysuru, the Director alerted his staff manning the check-posts and instructed them to allow only the 13 ambulances to pass the forest area in the midnight, thus displaying his humanitarian concern. The ambulances, after dropping the injured at K.R. Hospital, proceeded to Ooty and passed the Bandipur Forest only after the gates were opened this morning.

2 COMMENTS ON THIS POST To “Four killed, over 18 injured as bus falls into gorge near Ooty”