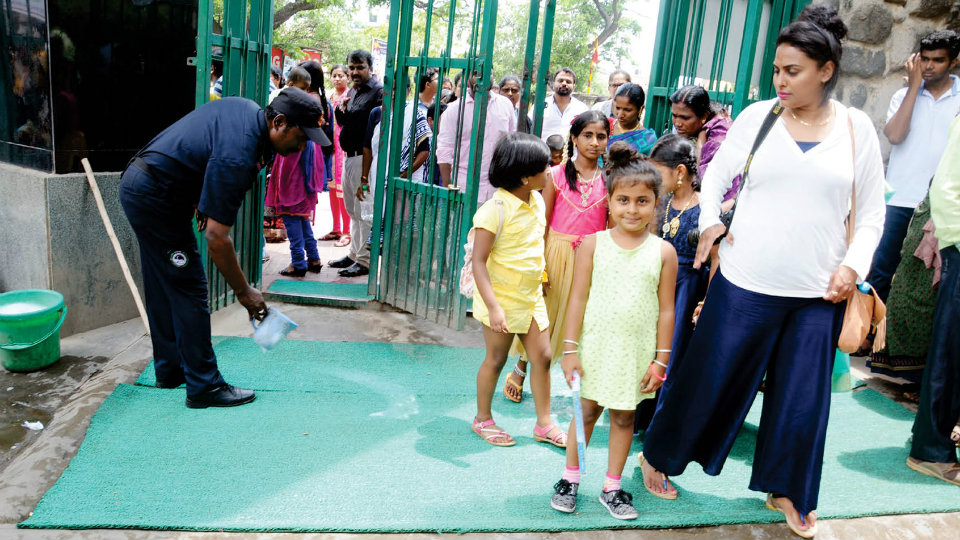 Mysuru: Not taking any chances like it happened during the bird flu scare where Sri Chamarajendra Zoological Gardens or the Mysuru Zoo was shut for a month from Jan. 4, 2017, this time, the Zoo authorities have geared up to combat the deadly Nipah Virus (NiV) threat.

Apart from spraying disinfectants to all trees, the Zoo authorities have laid a special carpet at the entrance that is disinfected and can combat the spread of the virus. Though there is no drop in the number of visitors to the Zoo, the authorities are careful as a large number of tourists – especially from Kerala where over 15 people have died due to Nipah virus – come to the Zoo on a day-to-day basis.

All visitors are being asked to compulsorily walk over the disinfected carpet at the entrance so that if any virus traces are present in their footwear, they are destroyed.

Thousands of bats are seen clinging to the branches of the lush green trees inside the Zoo. To allay the fears of visitors, the Zoo employees have taken up sanitising work in the premises using bleaching powder and other disinfectants.

The Zoo boasts of several fruit-bearing trees of the Ficus family like figs – a staple diet of the giant fruit bats. The dense greenery of the park, home to fruit-bearing trees like papayas and mangoes, also ensure ample food for the bats. Even during the day, colonies of bats are found hanging from the branches of the trees.  “We have been asked to keep a close watch on birds and animals kept inside enclosures. If any bird or animal falls sick, or die, it should be reported to higher officials for further scrutiny. There is nothing amiss so far and all animals are in good health. People need not be afraid unnecessarily,” said Zoo Executive Director (in-charge) C. Ravishankar.

Speaking to Star of Mysore, Ravishankar said that fruit-bearing trees are under close watch and ripe and semi-ripe fruits including mangoes, guava and jackfruits are being cleared to prevent bats from nibbling on them.

“We have sprayed disinfectants including ‘Costalin’ and ‘Vikron’ to all the trees with special emphasis on those trees where the bats usually take shelter. These disinfectants will prevent the spread of the disease and will neutralise the bat droppings,” he said.